Obama's Hiroshima Visit and the Strange Duality of Nuclear Weapons 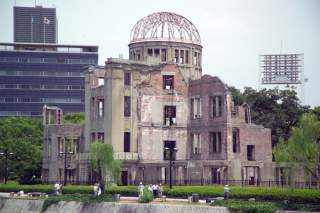 The White House announced last week that President Obama would visit Hiroshima later this month, making him the first US president to do so. He won’t be apologizing for the US’s dropping of the atomic bomb, and some reports suggest he doesn’t even plan on making a major address there. It’s a case where Obama’s damned if he does and damned if he doesn’t, of course. If he doesn’t make a major speech, commentators will see it as symptomatic of his continuing drift away from the anti-nuclear position he outlined in Prague in 2009. If he does, commentators will see the two speeches as the rhetorical bookends of an otherwise unremarkable legacy.

Actually, Obama’s legacy isn’t that underwhelming. He can point to a successful 2010 Nuclear Posture Review, a New START agreement with Russia, a nuclear deal with Iran, and a series of nuclear security summits. Yes, he has supported a modernization program for US nuclear forces, but the US is virtually the last nuclear power out of the blocks on modernization, not the first. As Robert Scher recently noted, the US now faces a situation where non-modernization would leave it with "a slow and unacceptable degradation in [its] ability to deter," facing off against other great powers which have already bitten the modernization bullet.

Arms control champions have been pushing Obama to use the Hiroshima visit to commit the US to something substantial. Michael Krepon, for example, has argued in favor of Obama’s going to Hiroshima, but only if he seizes the opportunity to advance his anti-nuclear agenda. Specifically, Krepon wants words and deeds that push for US ratification of the Comprehensive Nuclear-Test-Ban Treaty. That’s probably a bridge too far for Obama, who knows the groundwork hasn’t yet been properly laid in the US Senate for ratification and who’s conscious of just what a large—and difficult—nuclear agenda the incoming president will already confront.

To get a feel for that agenda, have a look at the videos of the panels at the recent CSIS conference on US nuclear policy post-2016. Issues of deterrence, assurance, arms control, modernization, money, and sustaining a bipartisan consensus on nuclear weapons policy, already seem likely to make the next president’s job especially challenging in the nuclear field.

Still, a visit to Hiroshima can’t help but be politically significant. It’s not the same as visiting other cities destroyed by allied airpower in World War 2—cities like Berlin, Dresden and Tokyo. As Krepon argues, "Tokyo is remembered for the horror of a world war that was waged against cities and civilians as well as on battlefields. Hiroshima is remembered for the weapon used to destroy the city and the people living in it."

John Kerry clearly found his visit profoundly disturbing. Hiroshima and Nagasaki are the only two places on earth that provide first-hand evidence of the devastating effects that nuclear weapons have on cities, even using first-generation, primitive weapons. It’s one thing for a policy-maker to know that they have such effects; another thing again to see them up close. The technical descriptions offered by reputable texts such as Samuel Glasstone and Philip Dolan’s The effects of nuclear weapons are scientifically accurate but determinedly impersonal; Hiroshima colors those descriptions with names, familial and social ties, injuries and death.

Japanese public opinion is split over the issue of whether the US president should be expected to apologize for the dropping of the bomb, but no more so than public opinion in most other countries. Indeed, a recent poll conducted by The Japan Times found that almost 65% of Japanese respondents thought Obama should not apologize, but that he should commit to nuclear non-proliferation. Even that might be difficult to do in a way that would satisfy skeptical listeners. The president could, of course, reaffirm the US’s commitment to the NPT, and to a vigorous counter-proliferation agenda, but he can’t promise to forsake modernization of the US arsenal.

It’s going to be a neat trick for Obama to ensure that his visit reflects the strange duality of nuclear weapons: that they are both massively destructive and—for now—strategically irreplaceable. Since he’s the bloke with the nuclear codes, his statements and reactions will be monitored more closely than Kerry’s were. But Obama can be thankful for one of life’s small mercies—unlike Harry Truman, US presidents today aren’t invited to cross the nuclear threshold by dropping nuclear weapons on cities. True, it’s uncertain if escalation control will work in a nuclear conflict, but planners are smart enough to know it probably won’t if the first round of warheads kill large numbers of civilians.