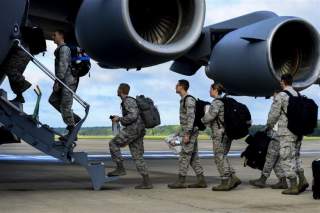 John Mearsheimer’s and Stephen Walt’s recent Foreign Affairs article advocating a return to offshore balancing is certainly generating a debate amongst the doyens of US foreign policy. Tom Switzer, for example, clearly likes their arguments. Dan Drezner doesn’t. So perhaps I ought to begin by outlining my own position. I accept the starting point for the Mearsheimer/Walt argument: the strategic mainstream is starting to fracture as America reprioritizes its domestic agenda. But I don’t accept that offshore balancing—a strategy under which the US stays ‘offshore’ from Eurasia for as long as possible and, even when it comes onshore, makes its allies carry as much of the weight as possible—would lead to favorable outcomes for either the world or America.

Despite the Mearsheimer/Walt argument that "by husbanding US strength, an offshore-balancing strategy would preserve US primacy well into the future," I don’t see how international observers would perceive offshore balancing as anything other than US retreat. And those perceptions would, in turn, fundamentally weaken the credibility of US security assurances to allies and partners. Critics would paint it as the waning of the Pax Americana, and not entirely without reason.

US relative strategic weight has been slipping for years, as other great powers have risen. Logic suggests a unipolar system will likely end with the unipolar power impoverished, exhausted, embittered, and resentful of its partners’ unwillingness to carry more of the burden. Well, most days it looks like we’re there. Structurally, the world is sliding from unipolarity to multipolarity, and as it does, the story of US commitment to its forward-exposed allies is becoming ever more difficult to tell. So the reflexive interpretation of a US move towards offshore balancing wouldn’t be one of continued US primacy, sustained far into the future, but of its passing: of a deep-level shift in the global strategic order which would make US allies far more reliant on policies of national self-reliance and/or regional partnership.

And that brings us to the second problem with a US move towards offshore balancing: it focuses more upon the benefits to the US from forward disengagement than it does on what comes after. Offshore balancing focuses upon two specific objectives—a US secure in its own hemisphere, and facing no rival hegemon in Eurasia. Those objectives suggest little or no role for the US as an order-builder, meaning that—by comparison with today’s world—the strategy would essentially drive a substantial reordering along the Eurasian rimlands, with no guarantee that local powers could build a stable peaceful order to replace the one that exists now.

Mearsheimer and Walt accept that Asia’s a special case: that China’s rise makes it likely to seek hegemony in the region and that relying on local powers to contain it—the ideal solution—‘might not work’. But I think it’s a generous interpretation of their argument to see them as supporters of the rebalance. True, the US footprint in Asia would be heavier than elsewhere, but that’s because they favour ending the US’s military presence in Europe and moving most of its forces ‘back over the horizon’ in the Gulf. I suspect that even in Asia, where regional security structures are weak beyond the US hub-and-spokes model, the push towards strategic ‘gamechangers’ would quicken abruptly. US allies would begin to re-consider options they had previously set aside to make themselves look spiky and indigestible. There are nearly 40 recipients of US extended nuclear assurances worldwide, for example. They wouldn’t all proliferate—but six to ten might.

Finally, offshore balancing itself turns upon a set of assumptions. One is that Western maritime pre-eminence can be sustained. Perhaps it can. But technology’s a fickle beast. Breakthroughs which make surface fleets more vulnerable and the undersea environment more transparent would be bad news for offshore balancing. For the US, projecting power back to Eurasia when it needed to do so might be harder than it is now.

And even if Western maritime pre-eminence can be sustained, offshore balancing assumes that the US can deal itself back into the game at a time of its own choosing. While offshore balancing explicitly recognizes the strategic importance of not allowing the emergence of a hostile hegemon on the Eurasian land-mass, it assumes that US pre-eminence there can be re-established as a matter of course. Since World War 2, the dominant view has been that a US presence along the Eurasian rimlands was a pre-requisite for such a strategy. The NATO REFORGER exercises, for example, worked on the assumption that it was easier to reinforce something ashore there than it was to build from zero in a crisis. Offshore balancing strategies throw away that advantage.

A return to offshore balancing would suggest a US looking backward—a US that wanted to return to the role it played in the world in the 19th and first half of the 20th century. Yes, that was a time when US power was near its peak, though perhaps not because of the specific strategic policy. But it wasn’t an especially peaceful time for the international order. World War 2 was well under way before America became involved. If we’re going back to an era when Washington’s more inclined to sit on its hands, we’re all—the US included—going to be living in a more fraught strategic world.