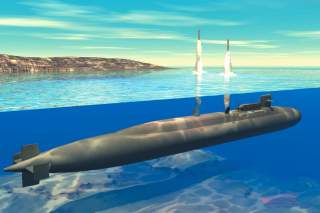 America’s Ohio-class ballistic-missile submarines are some of the quietest, stealthiest submarines in the world. The Ohio submarines represent America’s ace in the hole, megatons of nuclear firepower quietly patrolling the world’s oceans, ensuring that any nuclear attack on the United States will not go unpunished. In addition to the fourteen ballistic-missile submarines, four have been converted to missile carriers, capable of unleashing more than 150 conventionally armed cruise missiles against the most heavily defended of targets.

The Ohio-class submarines were the result of a early 1970s requirement for a larger missile submarine capable of carrying the next generation (and beyond) of submarine-launched ballistic missiles. Submarine-launched missiles were growing longer and wider, due to the demand that they carry multiple-warhead reentry vehicles while maintaining and even extending their range. The U.S. Navy’s older submarines of the George Washington and Ethan Allen classes were physically unable to accommodate the newer Poseidon and the projected Trident series of missiles.

The Ohio class was initially meant to be a simple upgrade of the Lafayette-class submarines, but the Navy was anxious to include advances in nuclear propulsion quieting learned from the USS Narwhal submarine and its Natural Circulation Technology reactor, the S5G, and ultimately decided in favor of a clean-sheet submarine design. The submarines were designed to be 560 feet long, with a beam of forty-two feet able to accommodate two rows of twelve Trident C-4 (later D-5) missiles each. The hulls were constructed of HY-80 steel for strength. The submarine displaces 18,750 tons submerged, and has an operating speed in excess of twenty knots.

The Ohio boats packed twenty-four Trident C-4 missiles, each with a range of 4,600 miles and carrying eight one-hundred-kiloton warheads. This was a marked improvement over the earlier Poseidon missile, which had a range of just 2,876 miles. While Poseidon could easily hit Moscow from the Norwegian Sea, more distant targets in central Russia and Soviet Central Asia were out of reach. The C-4 allowed the Ohio class to strike the same area from as far as the mid-Atlantic, or the entire western half of the USSR if operating east of Iceland. Altogether, each submarine boasted a total of 19.2 megatons in nuclear weapons.

In 1990, the Ohio-class submarines began transitioning to a new missile, Trident D-5, that is still in service today. D-5 is a larger, heavier missile that carried eight warheads of a hundred or 475 kilotons each, and has a maximum effective range of 7,456 miles. This considerable range upgrade makes it possible for a submarine equipped with Trident D-5 to strike any point in the former Soviet Union while tied up at the submarine base at Kings Bay, Georgia. Depending on the warhead configuration, each Ohio submarine armed with D-5s went to sea with a total of 19.2 to 91.2 megatons.

Each fleet ballistic-missile submarine spends an estimated 66 percent of its time at sea, with two sets of crews, Blue and Gold, alternately manning the boat. Patrols last for seventy days, with a twenty-five-day handover period in port between crews, meaning an average crew will spend seventy days at sea and ninety-five days on shore. A major twelve-month overhaul is undertaken every nine years.

Since the end of the Cold War a number of changes have come about to the missile submarine fleet. Under the terms of the START II treaty, the number of nuclear-armed submarines was reduced from eighteen to fourteen. The 2010 New START treaty limited the number of Trident D-5s deployed at any one time to 240 missiles. To comply with this, four missile-launch tubes per submarine are removed, reducing each submarine to twenty missiles each. Under New START each missile has an average of three to six warheads each.

Arms control experts Hans Christensen and Robert S. Norris estimate the United States has between four and five submarines on “hard alert” at any one time, capable of responding to a surprise nuclear attack, with another two undergoing overhauls. One of the least obvious but more important upgrades to the D-5 in recent years is the advent of the “super fuze” that allows them to attack hardened targets, including communications sites and missile silos. Although this ability to hand off counterforce targets to the submarine fleet is meant to make a smaller nuclear force more credible, some experts believe it making such a difficult to detect weapon so deadly is inherently destabilizing.

The four Ohio-class submarines removed from fleet ballistic-missile submarine duty still had ten to fifteen years worth of service left in them. Rather than dispose of the hulls the Navy found a radical solution: convert each to a guided-missile submarine, or SSGN. Each submarine had its ballistic-missile tubes reworked to carry up to seven Tomahawk cruise missiles, for a total of 154 missiles per submarine. A single sub can strike up to 154 targets with a one-ton warhead at ranges of nearly a thousand miles, a valuable capability in conventional conflict against countries like Iran, North Korea, or even Russia or China. The guided-missile variants represent a potent “kick down the door” capability, striking enemy command-and-control and air-defense assets before friendly manned aircraft come within range.

The fourteen Ohio-class missile submarines are unseen protectors of America from nuclear ambush. Each will probably remain in service for forty years or more, depending on how well their replacements, the Columbia class, stick to their timetable. Their conventionally armed brethren offer a powerful, flexible option for dealing with everything from terrorist groups to nation states. These undersea giants are not only the most deadly war machines ever built but some of the most flexible as well.