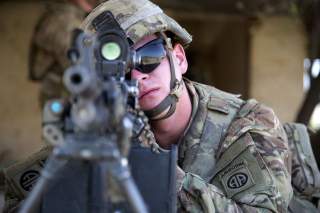 While non-state organizations like ISIS and Hezbollah have been using drones during their terror campaigns for some time now, such groups are starting to design and build unmanned aerial vehicles of their own design. Indeed, some of these “indigenous” designs are relatively complex machines and more sophisticated devices could soon be on their way to the battlefield.

In recent days, Iraqi forces fighting ISIS in Mosul have encountered not only the typical quadcopters that one can buy at an electronics store, but larger fixed-wing aircraft that are much more sophisticated. “There were also larger, fixed-wing craft fashioned out of corrugated plastic and duct tape, apparently made by the fighters themselves,” reports Al Jazeera’s John Beck.

Not only are the drones used for reconnaissance, the terrorists are increasingly loading the remotely operated aircraft with explosives and using them as a poor man’s cruise missile. “They also use a new tactic, where the drone itself has a bomb attached to it,” General Abdul Wahab al-Saadi, an Iraqi commander with Baghdad's counterterrorism service in eastern Mosul told Al Jazeera.

But even more dangerous terrorist drones might be on the way. In February 2016, a Conflict Armament Research team investigated a “drone workshop” operated by ISIS forces in Ramadi. “Photographic evidence from the workshop shows attempts to manufacture much larger drones from scratch, with a range of component parts under construction, including fuselages and wings, and avionics, such as camera controllers and gyro sensors, which are used to control an aircraft in flight,” the Conflict Armament Research report states.

The investigation team also discovered that ISIS was trying to arm its homebrew drone. “The investigation team also discovered an incomplete 9K32M ‘Strela-2M’ (SA-7b) man- portable air defence system (MANPADS) in the workshop and the disassembled components of a 9M32M MANPADS missile—notably the warhead section and the missile’s steering unit,” the Conflict Armament Research report states. “The co-discovery of drone construction and attempts to repurpose missile components plausibly suggests attempts by IS forces to develop some form of weaponised drone.”

Indeed, the ISIS drone might not even be a simple poor man’s cruise missile, but something that actually launches a weapon. “The other models they're trying to build are predominantly fixed-wing craft, which might allow for increased range or provide the ability to add a payload rather than just surveillance abilities, which is what we've observed in [our] report,” Conflict Armament Research managing director, Marcus Wilson, told Al Jazeera. “If they continue along this path, then we should be worried, because they still have a strong research and development capacity, have advanced their production abilities in the past, and still have the workshops capable of building sophisticated devices.”

But ISIS’ drone workshop and its homebrew designs are harbingers of the future. By the 2030s, the Pentagon predicts that new technological innovations might enable terrorists to actually defeat U.S. forces in battle. “Adversaries will continue developing capabilities to avoid or withstand U.S. technological overmatch,” states a Joint Staff document titled Joint Operating Environment 2035: The Joint Force in a Contested and Disordered World. “Many criminal and terrorist groups are likely to combine relatively cheap, accessible, and potentially disruptive technologies – such as social media, smartphones, 3D printing, robotic and autonomous systems – to degrade or even defeat U.S. systems in the future.”

Thus, the United States must be prepared to meet that challenge.