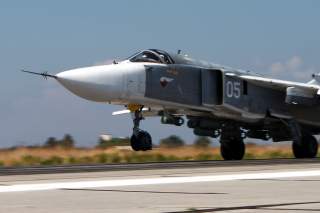 Moving away from the U.S., Duterte has sought closer ties to China and Russia. Having encountered difficulties procuring weapons from the U.S. due to disagreements over his shoot-to-kill drug war, Duterte is looking to new partners for weapons. In particular, the president wants precision bombs to use against Islamic militants operating in the southern part of the country.

“It is difficult for us. So we have this ISIS thing. I’ve been scouting around for [a weapon to finish them off]… I’m going to Russia. Same purpose. If they can spare us the precision-guided [bombs] … we have so many smart bombs but not as accurate as the ones guided by laser or satellite,” Duterte said at a coast guard event over the weekend.

“We have the dumb bombs which will just … leave unintended consequences such as killing of civilians, which we are really trying to not to use because it could cause so many collateral damage,” he added.

During his trip to Russia, the Filipino president will attempt to advance his goals of an “independent foreign policy.” Duterte believes that, “Overdependence on traditional partners has limited our room to maneuver in a very dynamic international arena.” The Chinese and the Russians supported the war on drugs at a time when the Obama administration was much more critical of the campaign. The U.S. also refused to provide certain weapons, as well as aid, to the Philippines, fearing inadvertent U.S. contributions to the anti-narcotics campaign.

“My visit underscores the independence of the Philippines’ foreign policy and the firm resolve to broaden the horizons of friendship and cooperation with other nations,” Duterte told reporters.

Duterte will spend the week in Russia, which he asserts produces better precision weaponry than the U.S.

“I have nothing against America, Trump is my friend. But my foreign policy has shifted. I want to deal with China and Russia. Because in Western world, it’s double talk,” Duterte told Russian media. “You treat me as if I’m your colony still. You must be kidding! We’re an independent country. I want my country to be treated with dignity,” he added, “Russia sells weapons, no conditions. With the U.S. it’s a different story. They make conditions. But I’m not gonna stand on bended knees.”

Some observers suspect that Russia intends to use the Philippines as a linchpin to offset Western power in Asia and engage the Association of Southeast Asian Nations bloc. China is believed to be doing the same through its engagement of Manila.

“There are three of us against the world – China, the Philippines, and Russia. It’s the only way,” Duterte said last year as he announced his “separation from America,” a statement he later rescinded.