One of America's Swarn Enemies Still Flies the F-14 Tomcat 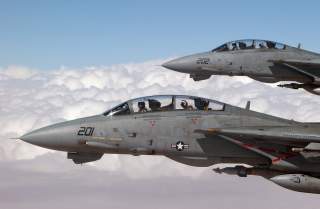 The F-14 was a product of failure. In the 1960s, the Pentagon hoped to replace thousands of fighters in the U.S. Air Force and Navy with a single design capable of ground attack and air-to-air combat. The result was the General Dynamics F-111 — a two-person, twin-engine marvel of high technology that, in time, became an excellent long-range bomber in Air Force service. But as a naval fighter, the F-111 was a disaster. Complex, underpowered and difficult to maintain, the Navy’s F-111B version — which General Dynamics built in cooperation with carrier-fighter specialist Grumman — was also a widowmaker. Of the seven F-111B prototypes that the consortium built starting in 1964, three crashed.