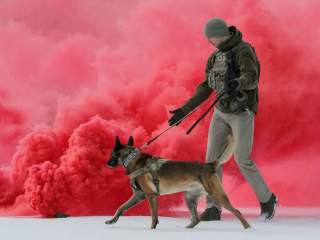 I was on this hill as a battery commander with six 88-millimeter antitank guns, and the Americans kept sending tanks down the road and we kept knocking them out. Finally, we ran out of ammunition and the Americans didn’t run out of tanks.

At the start of World War II, the combined economies of Nazi Germany and Imperial Japan were only half the size of the United States. If for no other reason than the sheer weight of its factories and work force, America thereby held the strategic high ground.

In fact, the statistical correspondence between economic power and military might in World War II is startlingly. While the United States could field over three hundred thousand military aircraft, a combined Germany and Japan had less than two hundred thousand.

The broader Stalinesque “quantity has its own quality” point is simply this: While brave American soldiers and sailors and flyers at the frontlines ultimately won World War II, they had at their backs heartland factories that could churn out tanks and planes and ships at rates far greater than the enemy could destroy them—definitive proof of the winning ways of what the great Prussian strategist Carl von Clausewitz once aptly referred to as “war by algebra.”

Today, however, many of those heartland factories that won World War II for America have been shuttered and moved to cities with names like Chengdu, Chongqing and Shenzhen. And here’s the obvious strategic problem:

If World War III does indeed arrive—triggered by some trigger-happy PLA captain in the South China Sea or a nuclear strike by Pyongyang on Seoul or America coming to Japan’s defense over some “rocks in the sea”—the United States will no longer have mass on its side.

Indeed, today, while China’s sixty major shipyards are working overtime to churn out submarine wolf packs and all of the various chess pieces that comprise carrier strike groups, many of their U.S. counterparts are either gathering dust, consolidating, or already closed down.

At the same time, while the production lines of Chengdu are churning out fifth generation fighters made with stolen F-22 and F-35 designs and Shenyang factories are busily cloning Russian Sukhoi jets, America’s F-22 has been cancelled and its F-35 program faces a squadron of budget and mechanical error bogies the likes of which no American weapons development system has ever seen. Meanwhile, as the U.S. space program remains grounded, China’s military-controlled starship enterprises are putting in place a global positioning system and space station to seize command of the ultimate strategic high ground while readying joint commercial-military trips to the moon and Mars.

So yes, we can all sit back and mainline popcorn on our sofas and continue to enjoy the nostalgia of World War II movies showing “good” triumphing over authoritarian, genocidal and hegemonic evil. However, the next war movies may well feature any one of a number of “new Nazis”—grindingly repressive regimes like China, Russia and Iran with dreams of regional hegemony, global empire and jihad; and these war flicks will almost certainly have a much different ending—unless America figures out a way to restore a manufacturing base that is withering before our very eyes.

Here, what is consistently missing in the national-security debate is any recognition of the critical nexus between the size and quality of one’s manufacturing base and its status as the ultimate WMD and the ability to wage war and militarily deter conflict.

At the same time, my friends in the national-security community continue to wring their hands over a rapidly shrinking navy and a military declining in both reach and readiness. However, they don’t want to be bothered with issues like unfair trade that are withering the very manufacturing base needed to rebuild the military.

It’s time, however, for the siloing of economics and national security to end. Clausewitz, Stalin and the Nazis taught us that long ago—but we just haven’t been paying attention.

Peter Navarro is a professor at the University of California-Irvine. This article is excerpted from Crouching Tiger: What China’s Militarism Means for the World (Prometheus Books). www.crouchingtiger.net. Footage for companion video courtesy of Death By China. Image: US Air Force Flickr - a military working dog and handler.