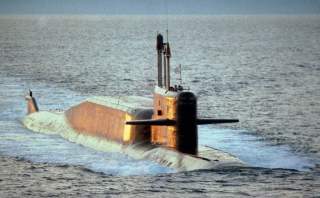 On Sept. 27, K-535 Yuri Dolgoruky, the lead vessel in the Project 955 Borei-class of ballistic missile submarines (SSBNs), launched two Bulava SLBMs from the White Sea towards the Kura testing range on the Kamchatka peninsula. While one of the missiles hit its targets successfully, the other self-destructed in flight. “The second rocket self-destructed after the first stage of the mission,” reads a statement from the Russian Ministry of Defense as quoted by the Moscow-based TASS News agency.

The Bulava missile—which is eventually expected to form the backbone of the sea-based portion of Russia’s nuclear deterrence triad—has been plagued with reliability problems. The Bulava had suffered from a string of failures before the weapon was finally declared operational on Oct. 15, 2015, after quality control issues during the production process were allegedly resolved. However, since November 2015, the Bulava has suffered at least three failures out of a total of four launches.

The problem with the Bulava missile is not the weapon’s design—which is sound, the issue is production. The Russian missile industry has simply failed to produce quality SLBMs consistently. “The Bulava’s problem is production quality,” said Mike Kofman, a research scientist at the Center for Naval Analyses specializing in Russian military affairs. “There are issues with serial production in Russia's defense industry.  You can ask the same question about Russia's space lift industry— component quality/consistency issues.”

While the Bulava’s test failure means that Russia’s Borei-class SSBNs are not currently going to provide an effective nuclear deterrent capability, the Kremlin still has its fleet of older Delta IV-class (Project 667BDRM Delfin) boomers in service. Though older and less capable than their newer Borei-class successors, the Delta IV-class SSBNs are armed with the formidable liquid-fueled R-29RMU Sineva and R-29RMU2.1 Liner SLBMs—both of which actually have much greater range and throw weight than the Bulava. “I think their deterrent is fine,” Kofman said. “The Delta IV is not going anywhere.”

Superficially, the Bulava is not a particularly impressive SLBM, the weapon’s specifications are exceeded by any number of older Soviet/Russian and U.S. missiles such as the Sineva or Trident II D5. However, the Bulava trades range and payload for enhanced ability to evade enemy anti-ballistic missile (ABM) defenses—particularly the Brilliant Pebbles space-based defenses envisioned under President Ronald Reagan’s Strategic Defense Initiative as Vladimir Dvorkin, a military fellow at the Carnegie Moscow Center writes.

The Bulava—and its land-based Topol-M and Yars counterparts—fly a flatter trajectory and have built-in protection to counter lasers and other ABM weapons, but those defenses come at the cost of some performance. However, the Kremlin has decided that the performance penalty is worth it for the extra survivability as the United States builds up it missile defense capabilities.

In any case, the Kremlin does not need to rely on its sea-based deterrent for an effective second strike capability. Indeed, while the Soviet Navy of old would defend heavily fortified bastions in the Arctic where their SSBNs would operate in relative safety, the much truncated current day Russian fleet does not have the ability to defend those regions as effectively. Thus, road-mobile or rail-mobile ICBMs such as the RS-24 Yars offer a much more survivable alternative given the vast reaches of Russia’s landmass. “Keep in mind Russia's sea-based deterrent is not its survivable second strike, and is much less important,” Kofman said.