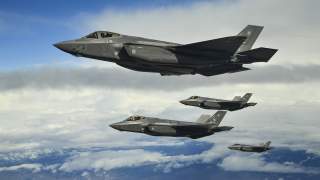 As tensions with a nuclear-armed North Korea continue to ratchet up, the United States Air Force is gearing up to deploy its brand new Lockheed Martin F-35A Joint Strike Fighter to Okinawa, Japan. A dozen of the stealthy single-engine strike fighters are expected to deploy to Kadena air base for a six-month theatre security package rotation in November.

“The airframe is ideally suited to meet our command’s obligations, and we look forward to integrating it into our training and operations.”

The 12 aircraft and about 300 service members will deploy from the 388th Fighter Wing’s 34th Fighter Squadron based at Hill Air Force Base in Utah. The 388th Fighter Wing is the U.S. Air Force’s first operational unit equipped with the new F-35 stealth fighters. The U.S. Air Force’s F-35As will boost the amount of available American airpower in the theatre, adding to Washington’s ability to strike targets deep inside North Korea should war break out.

However, the U.S. Air Force jets are not the only F-35s available in the Pacific theatre. The United States Marine Corps also has a contingent of short takeoff vertical landing (STOVL) F-35B aircraft permanently based at Marine Corps Air Station Iwakuni, Japan, since January, 2017. Compared to the Marine Corps’ jets, the F-35A carries a larger payload and has longer range, but lacks the ability to operate from short semi-prepared airstrips.

When it receives its Block 3F software and all of the bugs are worked out, the F-35A will be a potent strike aircraft, being able penetrate deep into enemy airspace to deliver its payload. However, the aircraft that are going to be deployed to Kadena have the older interim Block 3i software and are only capable of carrying a pair of Raytheon AIM-120 AMRAAAM air-to-air missiles for self-defense and the pair of GBU-12 500lbs laser-guided bombs or a pair of GBU-31 2000lbs Joint Direct Attack Munitions (JDAM). Meanwhile, the F-35B—which has shorter weapons bays—substitutes the 1000lbs GBU-32 JDAM in place of the larger GBU-31.

Even with the limitations of the interim software and hardware configuration, the F-35A and B should be a useful tool to strike at North Korea’s air defenses and command and control nodes during a war. The jets’ stealth capability gives it the ability to skirt around Pyongyang’s radar coverage to deliver its payload, which will be necessary to beat down North Korean air defenses. That should help to clear the way for conventional fourth generation fighters and bombers like the F-15E Strike Eagle and B-1B Lancer to enter North Korean airspace in relative safety to deliver their comparatively larger payloads.

Despite the war drums that are currently beating in Washington, D.C., the U.S. Air Force insists that the forthcoming deployment was long planned. However, the move will undoubtedly be seen as a signal to North Korean dictator Kim Jong-un as Washington continues its war of words with Pyongyang.

“This long-planned deployment is designed to demonstrate the continuing U.S. commitment to stability and security in the region,” the Air Force said in its statement.