One of the U.S. Navy's Most Powerful Warships Just Came Under Missile Attack (Again) 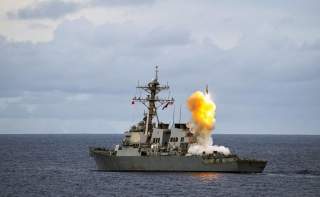 U.S. Navy destroyer USS Mason (DDG-87) came under missile attack from Houthi rebel-held territory in Yemen while steaming in international waters in the Red Sea earlier today. The incident is the second such attack on the 9,200-ton Arleigh Burke-class guided missile destroyer in four days.

“For the second time in four days, USS Mason responded to an incoming missile threat while conducting routine operations in international waters off the Red Sea coast of Yemen,” Pentagon Press Secretary Peter Cook said in a statement issued on Oct. 12. “At about 6 p.m. local time today (11 a.m. EDT), the ship detected at least one missile that we assess originated from Houthi-controlled territory near Al Hudaydah, Yemen.”

The missile did not damage the powerful Aegis destroyer—which the Pentagon says used “countermeasures” to evade the incoming missile. “The ship employed defensive countermeasures, and the missile did not reach USS Mason,” Cook said. “There was no damage to the ship or its crew.  USS Mason will continue its operations.  Those who threaten our forces should know that U.S. commanders retain the right to defend their ships, and we will respond to this threat at the appropriate time and in the appropriate manner.”

The Chief of Naval Operations, Adm. John Richardson, also issued a strong statement warning the attackers that they would not weaken the U.S. Navy’s resolve. “The US Navy remains on watch in the Red Sea and around the world to defend America from attack and to protect U.S. strategic interests. These unjustified attacks are serious, but they will not deter us from our mission. We are trained and ready to defend ourselves and to respond quickly and decisively,” Richardson said. “The team in USS Mason demonstrated initiative and toughness as they defended themselves and others against these unfounded attacks over the weekend and again today.   All Americans should be proud of them.”

The Pentagon did not offer any further details about the incident—however Reuters indicates that Mason fired at least two salvos of missiles to bring down the incoming weapon. USS Mason previously came under attack this past Sunday from two suspected anti-ship cruise missiles launched from Houthi-held territory. The ship defended itself with a pair of Standard SM-2 interceptors and an Evolved Sea Sparrow point defense missile. Additionally, according to USNI News’ Sam LaGrone, Mason used its Nulka decoys during its efforts to evade the incoming weapons. While the two incoming anti-ship missiles did not hit USS Mason—one incoming missile is thought to have impacted the sea without being hit by an interceptor while it is unclear if the second cruise missile was intercepted by the ships’ weapons.

Speaking at the National Press Club earlier on Oct. 12, Navy Secretary Ray Mabus told an audience that while the attacks were launched from Houthi-held territory, the United States has not yet confirmed that it was the Iranian-back Shia militia that attacked USS Mason. Earlier, the United Arab Emirates-leased former USS Swift—which was a converted high-speed ferry—was severely damaged by a suspected Chinese C-802 cruise missile launched from Houthi-held territory on Oct. 1 according to LaGrone’s report.

The Houthis—who are thought to be backed by Iran—are fighting against a Saudi Arabian-led military campaign that aims to restore the Sunni-led government of Abdrabbuh Mansur Hadiin Aden. But while the conflict is part of the larger overall Saudi-Iranian struggle for regional supremacy, the insurgency likely has nationalistic roots within Yemen. The Houthis—part of the Zaidi sect of Shia Islam—used to rule what is now Northern Yemen as an independent kingdom (or imamate) for roughly 1000 years until 1962. Thus, further involvement in the conflict beyond retaliatory strikes against those who attacked USS Mason could further embroil the United States in yet another civil war in the Middle East.

The United States has provided aerial refueling tankers and other assets in support of the Saudi offensive—which has come under fire from human rights organizations for its disproportionate attacks on civilians. That includes a Saudi attack on a Yemeni funeral this past Saturday where reports peg the death toll at 140. It is possible that the attacks on USS Mason are a form of retribution for the Saudi attack.