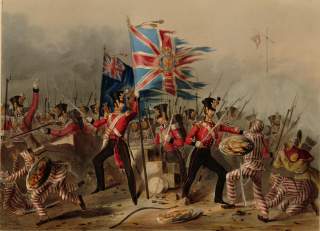 Once again, the Royal Navy demolished its Chinese opponents, sinking 23 junks in the opening engagement near Hong Kong and seizing Guangzhou. Over the next three years, British ships worked their way up the river, capturing several Chinese forts through a combination of naval bombardment and amphibious assault. France joined in the war — its excuse was the execution of a French missionary who had defied the ban on foreigners in Guangxi province. Even the United States became briefly involved after a Chinese fort took pot shots at long distance at an American ship. In the Battle of the Pearl River Forts, a U.S. Navy a force of three ships and 287 sailors and marines took four forts by storm, capturing 176 cannons and fighting off a counterattack of 3,000 Chinese infantry. The United States remained officially neutral.