Oshkosh Wins Contract to Build the U.S. Military's Next 'Humvee' 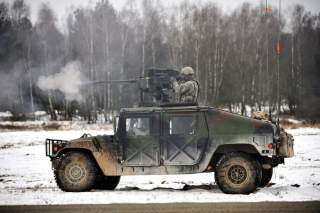 The U.S. Army and the U.S. Marine Corps have chosen their supplier for Joint Light Tactical Vehicles (JLTVs), their replacement for Humvees, and supplement to MRAP All Terrain Vehicles (M-ATVs). For now, and presumably the next decade, that supplier is Wisconsin’s Oshkosh Truck. The stakes were high, as the JLTV contract may be the last large military truck contract in North American for at least a decade. But if Oshkosh can keep its pencils sharp—and that’s a meaningful if—it may hold that franchise for a few decades after that.

As the Washington Post, National Defense magazine, and everyone else reported, the initial contract awards $6.7 billion for 17,000 vehicles over seven years. Low-rate initial production will begin late this year, and get rolling in about ten months. The Army’s first unit to receive JLTVs should fill its motor pool by 2018. The franchise may not be quite large as that of the Humvee, but probably as long-lasting. The USMC will have bought its lot of 5,500 by 2021, but the Army foresees buying 49,000 trucks over many years to come. With repeated rebuilds—an exercise in which Oshkosh excels—those vehicles could be in service until 2040, and the entire program could be worth some $30 billion. That’s not a Joint Strike Fighter, but it’s noticeable around Lake Winnebago. Champagne corks were likely popping, and over coffee in the morning, the news may even outrank talk of next weekend’s preseason Packers game.

Getting here, though, the going has been rough. It has been three years since the Joint Program Office (JPO) awarded roughly $60 million development contracts to Oshkosh, Lockheed Martin, and AM General. It has been eight years since the Army’s initial intended in-service date back in 2007. And it has been a decade since the promise of the JLTV was held up at Army Materiel Command and Marine Corps Systems Command as an excuse for not buying MRAPs—actually on the shelf then—sooner and faster. (For more on that, see my dissertation forthcoming next year.)

Whether the JLTV will prove as robust as the toughest MRAP is an open question, though retired Major General John Urias, president of Oshkosh Defense, thinks it will come close. The JLTV will certainly be more strategically and tactically agile—with the “off-road mobility of a Baja racer,” as he put it today. At M-ATV prices—almost $400,000 each—the JLTVs won’t be cheap. While Rohlfs & Sullivan might disagree, I can easily argue that safeguarding the lives and limbs of the troops inside is worth that figure. What’s less clear is how many are really needed. If the entire U.S. military overbought its way to 28,000 MRAPs, then 54,500 (admittedly smaller) JLTVs might seem excessive in a future budget drill.

For Oshkosh, the win bears along another threat. According to Reuters, the contract does include the expected option for the government to buy the technical data rights to the vehicle. For the JPO, just figuring out how to score the offer should not have been simple. “The economics of intellectual property rights” in the JLTV competition, I wrote here in February 2014, constitute real “managerial challenge of military procurement”. For Oshkosh, pricing those rights was probably vexing as well. Should the government exercise that option, it will be able to release the data to any and all prospective contractors in 2022, and solicit build-to-print bids. That’s exactly what the Army did with the data it already owned on the cargo trucks of the Family of Medium Tactical Vehicles (FMTV) some seven years ago. Oshkosh significantly underbid 17-year incumbent BAE Systems in 2009, and in the process, forced the closure of the old Stewart & Stevenson automotive enterprise outside Houston. (For a summary of my work on that issue, see my essay “Oshkosh, the FMTV, and the example of fixed-price contracting”, 28 October 2013.)

Underbidding didn’t work out well for Oshkosh in the short run, but it certainly removed a competitor. This procurement decision, unless reversed on one of the protests that AM General and Lockheed Martin may already be readying, may similarly restructure the business. Lockheed made a serious commitment in transporting the remnants of BAE's truck operation lock, stock, and barrel to Arkansas. Whether it will keep the team intact long enough to challenge Oshkosh in the re-competition remains to be seen. Entry may be followed as surely as exit. Of late, AM General has won contract manufacturing business for R-class Mercedes sedans, and export Humvee orders with the Mexican Army and others. Indeed, CEO Charlie Hall has been working hard to diversify beyond the franchise Humvee business every since taking over at the start of 2011. But the company is yet to convince the world that it has the engineering capacity to design and bring to market wholly new vehicles. Private equity is not always patient capital, and the asset is now much easier to value.

Another asset, an intangible one, is similarly about to change in value, but positively. As I told Defense News recently, Oshkosh will now be “supplying heavy, medium and light trucks to both the US Army and the USMC. Troops will see Oshkosh bumpers wherever they look.” John Alic, late of the late Office of Technology Assessment, lamented in 2007 that “no one asks” the military’s truck drivers what they want in new trucks (Trillions for Military Technology, Palgrave, pp. 107–108). After the IED and MRAP experiences in Iraq and Afghanistan, I doubt that’s any longer true. In my experience, you'll likely never find a Marine who’ll say anything negative about those almost ubiquitous Oshkosh trucks. And that “blanket of marketing” is soon to get all the more comprehensive.

This piece first appeared on the Atlantic Council's website here.