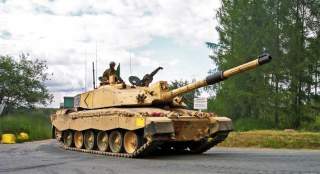 The British Challenger 2 tank is becoming obsolete in the face of new threats such as the Russian T-14 Armata. But the United Kingdom is preparing to embark on an upgrade program to keep up with advances in armored warfare.

Britain doesn’t have many other options. For one, the Challenger 2 will remain in service until at least 2035 because it’s too expensive to replace. “We have got issues with the tanks we’ve got and if we don’t do something about it we will have issues,” Gen. Nick Carter, the chief of the British Army General Staff, said last year.

To be sure, an upgraded Challenger 2 — itself a heavily redesigned version of the 1980s-vintage Challenger — can remain an effective and lethal tank. And it has a good combat record. The only problem is that it’s unlikely to receive the upgrades it needs the most because of cost.

So the British tank of the 2020s and 2030s might not be that different from the current one.

Here’s what we know about the proposed upgrade to the Challenger 2.

Britain will start awarding the first contracts in October, and an array of U.S. and European arms manufacturers want in on some $800 million worth of improvements for more than 200 Challenger 2s — the bulk of the British tank fleet.

The biggest possible upgrade — emphasis here on possible — will be to the Challenger 2’s turret. The tank’s current configuration also lacks an independent thermal sight for the commander, drastically limiting the crew’s ability to hunt for enemies at night. A new thermal sight is almost guaranteed.

Then there’s the Challenger 2’s gun.

See, the Challenger 2 has a fairly weak gun — known as the L30A1 — when compared to other modern tanks as described by the Below the Turret Ring blog.

The reason for this is because it has a rifled barrel, characterized by interior grooves that add spin to the shells as they travel down the length of the gun.

But modern tanks do not need such barrels, as almost all now rely on fin-stabilized rounds that maintain aerodynamic stability without the need for rifling. And with smoothbore barrels, you can create more pressure and impart more velocity, which means more penetrating power.

The Challengers and India’s Arjuns are the only two main battle tanks in the world still with rifled barrels.

Now consider that Russia is building new, heavily-armored tanks, and the Challenger 2’s gun appears to be somewhat of an anachronism. Especially now that Russian developments are also spurring a new French-German tank known as Leopard 3.

“The [British] Army now has control of its budget, priorities and requirements,” Ben Barry of the International Institute for Strategic Studies told Defense News in January. “Secondly, we have a resurgent Russia and finally the advent of operationally fielded active protection systems makes direct fire anti-armor guns and the tank much more important.”

But another concern for the British Army is that a new gun will require a redesign of the Challenger 2’s turret, as the current one’s internal storage space cannot fit enough of the ammunition fired through smoothbores.

Whether Britain actually will replace the gun depends on who wins the contract. An international consortium led by BAE Systems — a British company — has not proposed a new gun, while German arms manufacturer Rheinmetall has proposed to swap out the L30A1 with the versatile, high-velocity smoothbore L/55 as fitted on the Leopard 2.

That is in addition to a host of other improvements.

But there are economic weighing against Rheinmetall — particularly following Brexit with a shaky future for the British economy. The British government might prefer to buy British than spend millions more pounds — which have declined against the euro — on German guns.

And Britain might view a new gun and turret as too expensive, in any case.

The proposed upgrades from the BAE Systems-led team (which includes the U.S. company General Dynamics) are also far more modest than Rheinmetall’s. They include adding a thermal imager for the tank commander, improving the fire-control systems, gun-control systems and electronic interfaces.

The good news for the British Army is that the government is funding research into active-protection systems — which can disrupt incoming guided weapons before they strike — for the Challenger 2 as part of a separate program. But we won’t know whether the Army will adopt these defense systems until 2018.

But otherwise, unless there are any surprises, expect the new Challenger 2 to look a lot like the old Challenger 2.