Pakistan Is Literally Sitting on a (Nuclear) Powder Keg 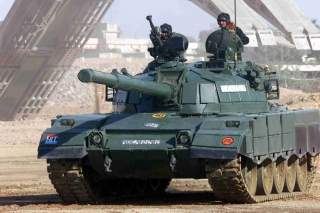 On February 16 a suicide bomber blew himself up in the main hall of the shrine of Pakistan’s most popular sufi saint, Lal Shahbaz Qalandar, killing at least 88 people, including 21 children. The shrine is located in Sehwan in Pakistan’s Sindh province, which has a strong tradition of sufism going back several centuries.It was obvious that the bombing was the work of one or more salafi (puritanical) groups that have been regularly targeting sufi shrines in Pakistan for the past couple of years. For what it’s worth, ISIS—itself a product of salafi ideology—has claimed responsibility for the deadly attack. It’s more likely, however, that it was the handiwork of one of the many salafi terrorist groups active in Pakistan, like Jamaat-ul-Ahrar, which also claimed responsibility.

The attack has once again exposed two major tensions in Pakistan’s polity. The first tension is the struggle in Pakistan between an inclusive version of Islam, a product of the syncretic culture of the Indian subcontinent, and the rigid salafi interpretation of the religion that has become increasingly popular in South Asia thanks to the funding of madrasas (religious schools) and mosques by Wahabbi-ruled Saudi Arabia. To the salafis—literally those who follow the path of the “righteous ancestors”—the sufi tradition, with its syncretic features, is anathema as they consider it a major deviation from the pristine form of Islam and its followers heretics if not unbelievers. Unfortunately, inclusive Islam, represented by the Sufi shrine in Sehwan, is on the defensive in Pakistan and has been so for the past three decades since the rule of General Zia-ul-Haq who had allied himself with Saudi Arabia in the context of the anti-Soviet insurgency in Afghanistan which both supported.

The second and equally important tension exposed by the attack in Sehwan is the inability of the Pakistan Army and government to keep in check ultra-fundamentalist terrorist groups operating in the country. The Pakistan army, especially its intelligence arm, initially sponsored these groups as surrogates in its struggle both to wrest Kashmir from India and to protect Pakistan’s strategic interests in neighboring Afghanistan torn by civil strife. However, several of them now operate largely outside the control of the armed forces and have become major agents for chaos and anarchy in the country as demonstrated by the Sehwan massacre.

Additionally, Islamabad has been able to amass a respectable nuclear arsenal and delivery systems, both missile and aircraft, that can cause havoc if they fall into the hands of terrorist elements that seem to be running wild in the country. Moreover, even in “responsible” hands—namely, those of the military high command—these nuclear weapons are a major cause for concern.

One can’t rule out the possibility that escalating tensions with India over Kashmir (and they seem to be escalating by the day) and Pakistan-based terrorist attacks that are becoming increasingly frequent, especially against Indian military targets, can lead to a full-fledged shooting war across the LOC in Kashmir and the international border.

The Modi government has become increasingly bellicose in its statements following recent attacks by Paksitani terrorists on Indian military targets. Those attacks have caused sizable Indian casualties and led to several pinpoint strikes by Indian forces against “terrorist targets” in Pakistan and Pakistan-occupied Kashmir. India’s Hindu nationalist government is under considerable pressure from its hardline domestic constituency to escalate counter-attacks. Afraid of losing its credibility with its political base, New Delhi may not be able to resist such pressure for too long and a major retaliatory attack could lead to all-out war between the two neighbors. The Pakistani military could be tempted to use tactical nuclear weapons against Indian military targets in such a contingency, which could quickly turn into a fully-fledged nuclear exchange devastating the subcontinent and contaminating much of Asia for decades.

Even a sub-nuclear confrontation between India and Pakistan is likely to throw the region into turmoil with major consequences particularly for the US and its allies engaged in containing the Taliban threat in Afghanistan. The Taliban, although some of its factions may have turned against Pakistan lately, were Pakistani creations and even now the Pakistani military is in a position to use them for its strategic purposes in Afghanistan. Since Pakistan’s goals in Afghanistan—containing Indian influence in the country, keeping its surrogate forces functioning, and keeping the Afghan government off-balance—diverge from those of the US and its allies, it mightn’t be averse to stoking the fires of civil war in that country at the expense of American and allied interests.

Pakistan is literally sitting on a powder keg. The increasing ascendancy of militant salafi Islam, the military’s patronage of terrorist groups that it’s now unable to fully control, plus its nuclear arsenal and continuing confrontation with India over Kashmir, have created an explosive mixture that make it a classic case of impending state failure. If that happens it could mark the beginning of major chaos and mayhem in South Asia thus making the region increasingly resemble the Middle East next door.