Past Problems Can't Stop the U.S. Navy From Building a New Frigate 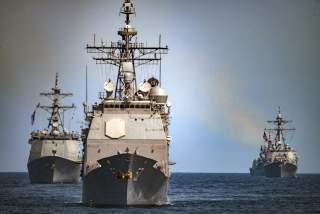 The United States Navy should not take council from its fears when it comes to the design of its new frigate. While it is true that technical challenges and cost overruns associated with the Ford-class supercarrier, Zumwalt-class destroyer, and the Freedom- and Independence-class Littoral Combat Ships (LCS) (which admittedly are not having cost issues) have been significant and almost crippling, the Navy should not allow itself to be so consumed by these failures that it takes a “safest path” approach to its new guided missile frigate design.

Earlier this week the Naval Sea Systems Command issued a talking points memo that promoted the achievements of both LCS classes, complete with highly complementary quotes from senior Navy admirals—including Fleet Forces Commander Phillip Davidson, who is perhaps the Navy’s strongest candidate to be the next Pacific Commander. Near the end of the talking points, the memo suddenly rapidly shifts its focus to the Navy’s new guided missile frigate program. The structure of the memo suggested a natural link between the LCS ships—which the memo promoted as “ninja warriors”—and the new frigates, and carried more than just a hint that perhaps the new frigate should, in fact, be a derivative of one of the current LCS designs.

This is not altogether incongruous with the Request for Information (RFI) the Navy issued this past July, when it asked the industry to help it identify design tradeoffs. Two important points stated in the RFI were that the Navy desired to begin production of the new frigates as soon as possible, purchasing the first ship in fiscal year 2020 after the last LCS was bought in 2019 and, because of this time compression, no new “clean sheet” designs—which would have lengthy development periods—were desired. Instead the Navy wished to consider “mature” designs that were already in production. Additionally, the Navy made it clear that it was willing to consider designs from foreign shipbuilders so long as the design could be built in an American shipyard. It could be surmised from this language that both LCS designs and the Coast Guard’s Bertholf-class National Security Cutter, all of which are in production within the United States, would be considered. In addition, foreign designs such as Fincantierri’s FREMM frigate, Navantia’s Bazan-class frigate or BAE’s Type 26 frigate could also be considered, as each has a U.S. shipyard or partner shipyard where their ships could be built. There may be other designs under consideration as well.

This field of prospective builders represents a tremendous opportunity for the U.S. Navy to select a proven design that is already in the water serving in other navies with a well understood maintenance and operational record. In addition, there is a strong potential for benefit through interactions with foreign builders: none of the world’s largest shipbuilders are U.S. based. In fact, most are located in Asia, with only Italy’s Fincantieri, which builds everything from large cargo vessels to submarines, representing the West in the top tier. The United States would benefit from exposure to better design features, building processes and management practices. This is why the Navy’s apparent attempt to link the FFG(X) to the LCS program is so troubling.

It is not surprising that the Navy might push either of the LCS designs as their desired outcome. After the troubles associated with the previously mentioned carrier and destroyer designs, as well as the significant challenges associated with maturing both LCS designs, the Navy may simply desire to stick with something that is already in production and approaching the “tried and true” stage of its maturation. This method has worked with the Burke-class destroyer line, which has been in production since the late 1980s and has no end in sight. However, each of the LCS designs has inherent restrictions with regard to their size, lethality, range and power production, as well as issues with survivability and continued evolvability over the life of the ship. These are issues that have been recognized within each classes’ maturation process, but as they are inherent in the designs and will not go away.

This is not to say that both LCS designs should considered within the FFG(X) competition. They are, after all, both “mature.” But it does not follow that they should be given “head of the line” privileges. Such a hint raises the question as to whether it is advisable to continue to lodge the new FFG(X) program (PMS 515) within the LCS Program Executive Office. Navy leadership should make it abundantly clear that all of the designs submitted by the industry will be considered fairly and objectively. They should also make it clear that the Naval Sea Systems command is not putting their finger on the scale due to its aversion to the risk that might accompany the startup of another ship production line—or perhaps even a desire to seek validation of much-maligned LCS designs by seeing one of them picked as the new frigate.

What is clear is that the Navy needs a new frigate that is robust enough to cover multiple missions while also remaining affordable enough to be purchased in large numbers. Such a ship will allow the Navy to return to the high-low mix acquisition strategy that characterized it in the past and achieve a balance between war-winning capabilities and peacekeeping capacity. Mature domestic and foreign frigate designs will help us achieve this goal quickly, but all should be considered equally.