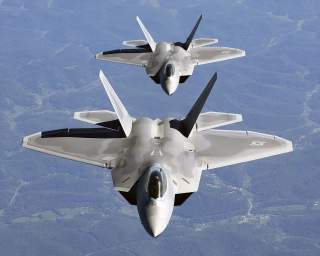 The stealthy supersonically cruising air superiority fighters are the only fighters in the U.S. inventory that can safely fly within the engagement envelope of Russian S-400 and S300V4 surface-to-air missiles defense while the Pentagon ascertains how the Kremlin will respond to the American cruise missile attack on Syria last week. Indeed, the stealthy fighters would likely play an outsized role in suppressing those Russian missile batteries if the White House chooses to expand its campaign against the Syrian regime led by Bashar al-Assad which can operate in airspace where older conventional jets can’t.

“The Russian missile systems are a big issue for our fourth gen platforms,” a senior U.S. Air Force F-22 Raptor pilot told The National Interest.  “We'd use our fifth gen assets to include fighters, bombers and missiles if required to penetrate and strike targets as required.”

Nonetheless, the Russian missile defenses are formidable. “The S-400 is a true anti-access/area denial system to most aircraft, but we have the capability to maneuver inside of Syria to hold targets at risk,” the Raptor pilot said.

But while F-22 pilots are confident about the Raptor’s ability to defeat the S-300V4 and the S-400, the Air Force official acknowledged that the stealthy fifth-generation aircraft has never faced off against these next-generation Russian air defenses in actual combat before. The Air Force is not 100 percent sure if the Russians have the capability to attack the Raptor or F-35—as the Russians have often claimed.

“I'm going to have to say ‘it depends’ and unfortunately I can't elaborate due to security classification—hope you understand,” a senior Air Force official told The National Interest. “You can make a case either way... The exact environment and other factors matter. Those who really understand the threat and are privy to F-35 capabilities would control the fight so that we are at an advantage to survive and kill. However, if you're stupid, the F-35 can put itself into a vulnerable situation... Just like any weapon system.”

A retired senior Air Force official agreed that the Russian air defenses are a genuine threat—but that is why the service has advocated for buying more stealthy aircraft like the F-35.

“The S-400, S-300V4 and to a lesser degree the Pantsir batteries are a concern,” retired Lt. Gen. David Deptula—a former F-15C Eagle pilot and Air Force intelligence chief—told The National Interest. “And that is why some of us have been saying for over a decade now that low observability is key to successful operations and surviving in advanced integrated air defense environments.”

Airpower analysts too agreed that the Russian air defenses would be a serious problem during the early stages of any air campaign. “Initially, they would be a significant problem. If airstrikes launched on Syrian forces—which is still a big if—their air defenses would be among the first targets attacked,” Mark Gunzinger, a former B-52 pilot and senior fellow at the Center for Strategic and Budgetary Assessments told The National Interest shortly before last week’s cruise missile strike.  “Cruise missiles such as Tomahawks and JASSMs would probably be used to surprise S-400s and S-300V4s. There may be little need to use manned aircraft them against these threats, especially when other options exist to suppress them. I also suggest that an initial wave of standoff strikes would be launched by U.S. bombers operating from CONUS bases. That would reduce the likelihood—however remote—of counterstrikes against regional airbases used by U.S. forces, plus it would reduce political friction with regional partners hosting US air forces who would have to grant permission for offensive operations against Syria's military. Of course, F-22s and B-2s would have significant roles to play, especially if an operation was intended to be more than a short, sharp, shock.”

Meanwhile, the Russians have long claimed that they can detect, track and engage stealth aircraft such as the F-22 and F-35. However, it is difficult to gauge the accuracy of the Russian claims. “I do not know what will be the exact performance of the Russian SAM systems in this particular situation—I think it is hard to tell now,” Russian defense and foreign policy expert Vasily Kashin, a professor at Moscow's Higher School of Economics (HSE) told The National Interest. “Russians claim that the long-range SAM can shoot down stealth planes, although the range could be reduced. Pantsir systems are primarily against missiles and bombs not the planes carrying them and they will act as the second line of defense. But this is a minor issue. In this case we will have a war and there will be cruise missile attacks against the U.S. forces across the Middle East and then it will escalate to a full scale war.”