Pay Attention to North Korea’s H-Bomb Claim. The West Has Been Wrong Before. 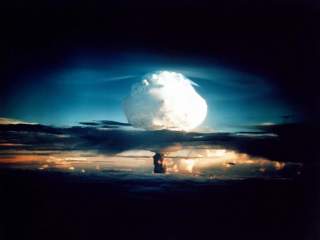 North Korean leader Kim Jong-un asserted that his country has built a hydrogen nuclear bomb to “defend its sovereignty and the dignity of the nation.” If true, it would mark a significant and startling escalation in the regime’s ability to threaten the United States in its allies. While North Korea has developed an arsenal of atomic bombs and missiles to deliver them, it is uncertain if not unlikely that Pyongyang has yet mastered development of more powerful hydrogen weapons.

While Kim’s assertion about hydrogen bombs is being met with expert skepticism, experts have frequently underestimated North Korea’s nuclear and missile programs due to ideologically driven analysis, political expediency and the belief that a technologically and economically backward nation could not achieve the necessary breakthroughs. Skeptics initially dismissed evidence of North Korea’s plutonium-based nuclear weapons, highly enriched uranium (HEU) program, involvement in constructing a Syrian nuclear reactor and ability to develop long-range missiles.

Regardless of the validity of Kim’s hydrogen bomb assertion, North Korea is already a nuclear threat. Experts estimate that Pyongyang currently has ten to sixteen nuclear weapons. The Johns Hopkins School of Advanced International Studies predicts a worst-case scenario of the regime possessing 100 nuclear weapons by 2020. North Korea has likely already achieved warhead miniaturization, the ability to place nuclear weapons on its medium-range missiles, and a preliminary ability to reach the continental United States with a missile.

The regime’s No Dong medium-range ballistic missiles already put Japan and parts of South Korea under a nuclear threat today. North Korea also continues its development of long-range missiles to attack the United States. According to The Heritage Foundation’s calculations, North Korea’s Taepo Dong 2 missiles, with a range of 10,000 kilometers, are within strike capability of 120.6 million people or 38 percent of U.S. population.

In April 2015, Admiral Bill Gortney, commander of NORAD, told reporters that the KN-08 road-mobile ICBM (intercontinental ballistic missile) “is operational today. Our assessment is that they have the ability to put a nuclear weapon on a KN-08 and shoot it at the [U.S.] homeland.”

The four-star commanders of U.S. Forces Korea and Pacific Command have made similar threat assessments.

Pyongyang also has a long history of making nuclear threats against the United States, South Korea and Japan, threatening to turn the capitals into “seas of fire.” For example, in 2014 the National Defense Commission vowed an “ultra-harsh war of reaction targeting the entire U.S. mainland, including the White House [and] the Pentagon, which are the base of terrorism.”

Experts will assess and debate North Korea’s latest nuclear claim, but the regime already poses a serious and growing nuclear threat to the United States and its allies.

Bruce Klingner, a senior research fellow for Northeast Asia at The Heritage Foundation's Asian Studies Center, spent 20 years in the intelligence community working at the CIA and Defense Intelligence. This article first appeared on the Daily Signal.