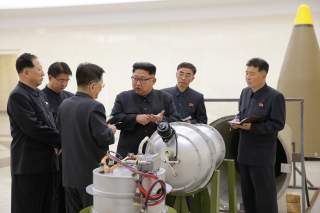 As the two Koreas march together under a “unification flag” at the 2018 Winter Olympics in PyeongChang next month, life in North Korea will go on as usual. The North’s scientists will continue to develop nuclear armed ICBMs capable of striking the U.S. mainland. Thousands of prisoners will still suffer in modern day concentration camps. Children in the countryside will remain malnourished and underfed. So despite the Moon Jae-in administration’s claim that “peace on the Korean Peninsula . . . begins in PyeongChang,” North Korea’s participation in the games will not resolve the one issue preventing real peace in Korea: the existence of the Kim regime itself.

What the current South Korean government proposes instead is a one-sided peace in which Seoul offers concessions while Pyongyang strengthens its nuclear capabilities and perpetrates violence against its own people. It is the latest in a frustratingly long history of misguided attempts to win over the Kims. Repeated efforts by the international community to gradually and peacefully “normalize” the North fail for one reason: they assume that the Kim regime wants the same things they do, namely prosperity, integration into the global economic system, and better relations with the West.

But the Kim regime isn’t seeking those things. On the contrary, they are frightened by them. The regime’s thin basis for legitimacy derives from the Kim family mythology and from their ability to protect the North Korean people from perceived outside threats. If North Koreans become prosperous, with greater access to the outside world, or if relations with the West suddenly improve, then the Kim regime would lose the justification for its totalitarian rule. They would be forced to open their system and would risk being carried away by forces that they could no longer control. Overwhelming evidence of systemic human-rights abuses perpetrated by the state ensures that Kim would have no place in a free, open North Korea, much less a unified peninsula. Spared a violent, Qaddafi-like demise, the best Kim could hope for would be a jail cell in The Hague.

Thus, Kim understands that any move to fundamentally transform North Korean society is dangerous. He must keep himself armed with nuclear weapons and his economy just stable enough to prevent another widespread famine or an exodus of refugees. It is not in his interest to accept what the rest of the world has to offer. Instead, the more powerful his nuclear arsenal becomes, the better he can negotiate and extract rewards on his terms. He can dictate the parameters for talks, and the rest of the world will accept them, believing that as long as they are talking, the North will cease its provocations.

But in this scenario, there would be no real, lasting peace on the Korean Peninsula. It would be a dictator’s peace of fear and intimidation, a peace of mutually assured destruction and continued oppression of the North Korean people. If this is acceptable to the international community, then we can continue the current policy of sporadic talks and ineffectual sanctions. But if real peace is the goal, the Kim regime has got to go.

This is not to say that the United States or any outside power should attempt to remove Kim Jong-un by force. There are too many risks and too many unknown variables for military strikes or a “decapitation” mission to be considered valid options. Instead, the West should do more to foment dissent within the North Korean elites and amongst its citizens. Large scale, state sponsored campaigns to flood the country with outside information would chip away at the regime’s propaganda and encourage people to defect or unite against the regime.

More importantly, as recent high-level defectors indicate, there is already discontent within the ruling class. This should be exploited by the international community. Through a relentless push for dialogue, the West can use Track 2, Track 1.5, and Track 1 meetings to build a more comprehensive picture of where the cracks lie within the leadership. By offering full support and recognition to the leaders of a successful coup, the world could inspire a disgruntled and disillusioned elite to risk their lives in order to lead their country down a path to real prosperity. Anyone willing to overthrow Kim Jong-un on these terms would be someone with whom the world could negotiate.

Seeking regime change also requires strengthening sanctions and identifying evasion measures. While this won’t bring about denuclearization, it might convince members of the ruling class that they have more to gain in a different system than the one they live in now. If China and Russia, North Korea’s traditional backers, do not follow the West’s pursuit of this strategy, they will only find themselves with less leverage to help shape a post–Kim Korea.

If regime change occurs, all of the countries with a stake in the peninsula would benefit. China would gain a stable and friendly business partner, rather than the dysfunctional and unsavory ally it has today. The United States would be able to deal with a government in Pyongyang that, at the very least, would not threaten nuclear war, and would hopefully reform its political system and normalize relations. South Korea would have to forgo unification in the short term, but it would also be able to form a pragmatic relationship with a new North Korea and begin to bridge the huge disparities that exist between their peoples.

This strategy is not without risks. However, these risks are less than those of allowing the Kim regime’s nuclear ambitions go unchecked or using military force to oust them. It is also a proactive, as opposed to reactive, strategy that gives the West a discernible goal and the initiative to see it through. For too long, policies towards North Korea have consisted of waiting for their next provocation, and then designing ineffective measures to stop them from doing it again. Rather than continue down this path for another generation, it is time for the world to accept that “peace on the Korean Peninsula” begins when the Kim regime ends.

Ben Forney (@ben_forney) is a research associate at the Asan Institute for Policy Studies.