Peace Through Strength, Across the Centuries: True Then, True Today 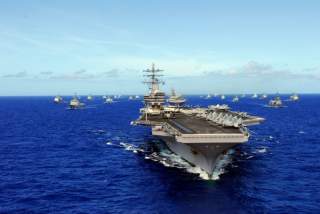 The words “peace through strength” have been included in the Republican Party platform every four years since 1980. But the phrase’s origins date back some 1,900 years before that, attesting to the fact that its wisdom has stood the test of time.

"Si vis pacem, para bellum,” a Latin adage translated as “If you want peace, prepare for war” has been traced to an author in the late 4th century, while the more concise “peace through strength” goes back even further, attributed to Roman Emperor Hadrian (AD 76-138).

In the 1980 presidential campaign — amid the Iranian hostage crisis— Ronald Reagan invoked the phrase to serve as a contrast to incumbent President Jimmy Carter’s leadership as being weak and equivocal, and only serving to embolden our enemies. Following his landslide win, Reagan made the concept of peace through strength one of the cornerstones of his foreign policy.

“We know that peace is the condition under which mankind was meant to flourish. Yet peace does not exist of its own will. It depends on us, on our courage to build it and guard it and pass it on to future generations,” the Gipper explained in an address to the nation on national security on Feb. 26, 1986.

“George Washington’s words may seem hard and cold today, but history has proven him right again and again. ‘To be prepared for war,’ he said, ‘is one of the most effective means of preserving peace.’ Leavening the serious policy discussion with his trademark folks humor, Reagan added: “Well, to those who think strength provokes conflict, Will Rogers had his own answer. He said of the world heavyweight champion of his day, ‘I’ve never seen anyone insult Jack Dempsey.’”

Put another way, the best defense is a good offense.  Reagan’s national defense policies — grounded in the concept of peace through strength — led to the fall of the Berlin Wall (“Mr. Gorbachev, tear down this wall!”) and the collapse of the Soviet Union, and with those came the end of the Cold War, all without a single shot fired or a single missile launched.

In so doing, Reagan proved the naysayers — including many in his own party — wrong. It’s against this historical backdrop that the Ronald Reagan Presidential Foundation and Institute each year presents to two recipients the Ronald Reagan Peace Through Strength Awards. The award honors individuals whose courage and leadership in support of our nation’s armed forces, at home and abroad, have contributed to the security of the American people and the advancement of freedom.

The first of this year’s two recipients will be former Vice President Dick Cheney, who earlier in his career, from 1989 to 1993, served as secretary of defense under President George H.W. Bush, a role that saw him leading Operation Desert Shield and Operation Desert Storm. Cheney saw firsthand how the Reagan defense buildup made possible the swift victory in those operations, more commonly referred to together as the Gulf War.

The other recipient will be Ashton Carter, the current defense secretary, in office since February 2015. Carter previously served as assistant secretary of defense for international security policy under President Clinton from 1993 to 1996, as undersecretary of defense for acquisition, technology and logistics from April 2009 to October 2011, and as deputy secretary of defense from then until the end of 2013. In the latter two posts, he overcame bureaucratic inertia to get our troops in the field the equipment they needed to defeat the enemy. As secretary, he’s focused on preparing our military for the threats of tomorrow.

“Secretary Carter and Vice President Cheney are both immensely worthy of this honor, having dedicated their careers to protecting and preserving freedom through a strong national defense and showed immeasurable respect for the role America’s defenses play in strengthening world peace,” said Frederick J. Ryan Jr., chairman of the board of trustees of the Ronald Reagan Presidential Foundation.

The Peace Through Strength Awards Cheney and Carter will be presented with are represented by a trophy that consists of a bronze eagle, its wings spread, set upon a black granite base. The eagle symbolizes the strength, courage and wisdom of both Reagan and of the nation he loved so dearly. Clutched in the eagle’s talons, fittingly, is a piece of the Berlin Wall.

It’s meant as a powerful, symbolic reminder that, in Reagan’s own words: “Freedom is never more than one generation away from extinction.”

John Heubusch is executive director of the Ronald Reagan Presidential Foundation and Institute.