Pentagon on Alert as Russia Preps for Huge Military Exercise 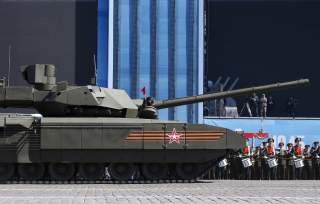 The investigation of Russia’s interference in the 2016 U.S. election is consuming the White House and gripping official Washington. The Pentagon, meanwhile, is turning its attention to Russia’s increasing military might.

Defense and military experts from around the world will be anxiously watching a war rehearsal in mid-September in Belarus, where Russia is expected to mobilize nearly 100,000 troops and showcase some newly developed shiny objects.

Analysts say the exercise, known as Zapad, is poised to be Russia’s largest and most complex display of combat forces since the end of the Cold War.

The scope and breadth of Zapad are making U.S. allies in Europe nervous. The event is of enormous interest to the Pentagon and should shed new light on the tactics and technologies that are turning Russia’s military into a formidable foe.

Chairman of the Joint Chiefs of Staff Gen. Joseph Dunford last week characterized Russia as the “most capable state actor that we face.”

Granted that Russia is one of many threats the Pentagon worries about, it certainly is the most “militarily capable,” said Dunford.

Russia spends a lot less money on its war machine than does the United States. Its advantage is that it employs forces in nontraditional ways. “They integrate cyber and unconventional operations,” he said. “We have to be able to compete.”

Gen. Raymond Thomas, head of U.S. Special Operations Command, said the exercise in Belarus is alarming Eastern Europeans because they view it as an attempt by Russia to deploy forces closer to NATO. “The great concern is that they're not going to leave,” Thomas said last week at the Aspen Security Forum.

“And that's not paranoia,” he insisted. The neighboring countries fear it is a “play to get closer and get better staging.” Eastern Europe frets over the possibility that Russia will decide “to bite off a piece of their country, much like they did Eastern Ukraine and Crimea,” Thomas said.

Military technologists are especially curious to see if Russia will unveil new drones and tactics for employing them. This has been a sore issue for the U.S. military and NATO after they were caught off-guard by Russia’s innovative use of drones as electronic warfare weapons in places like Syria and Ukraine.  This became a lesson in how U.S. enemies can take a relatively simple technology and turn it into powerful tools of war.

Russia’s unmanned systems burst onto the scene about six years ago. Their deployment is one way Russia believes it can bridge the gap with NATO forces, which maintain qualitative technological superiority. Their successful use of drones to jam communications systems and GPS satellite signals surprised the West, compelling the U.S. military to start developing similar capabilities, as well as techniques to counter Russian electronic attacks.

A torrent of data on Russian military capabilities is being studied and analyzed by the nonprofit think tank CNA, based in Arlington, Va. The research is funded by the U.S. Navy and other Defense Department agencies.

The Russians at Zapad will show how they are using drones for intelligence collection and surveillance, in addition to electronic warfare, Bendett said. They also will employ drones as “spotters” to help find enemy forces. “We probably won’t see any new unmanned air vehicle designs, but we might see a glimpse of Russia making the best of what’s available — that is, small drones armed with small munitions and small ordnance.”

Russia has been studying Islamic State militias’ use of cheap, commercial drones as weapon delivery systems. In recent promotional videos from Russian weapons testing ranges, small drones were seen dropping bombs on targets, Bendett said. “We may also get to see Russia making good on its promises to start using unmanned aircraft in swarming configurations, as well as unmanned ground vehicles and small drones working together to augment ground forces.”

Like ISIS, the Russians see simple commercial drone technology as a “force multiplier,” said Bendett. Russia’s drone inventory has jumped from less than 200 in 2011 to over 2,000 today, he said. Most are small-size models.

The U.S. military, to be sure, is far ahead of Russia in unmanned technology development overall, Bendett noted.

“Russia is only starting to develop policy and government support that the United States had in place for decades, such as military service laboratories, and coordination with the private sector on needs and requirements, well-funded research and development mechanisms, and other factors that allow for rapid development and testing of systems.”

But the race for unmanned systems dominance is tightening as Russia, along with China and Iran, continues to achieve breakthroughs in a relatively short time. Ground robotics is where Russia has made the greatest strides when compared to their American counterparts, Bendett said.

Over the past five to six years, Russia has produced impressive armed robots that could eventually replace conventional armored vehicles and tanks, he said. The idea is to deploy unmanned ground robots along with swarms of small drones.

CNA analyst Michael Kofman said Russia is making military technological advances even though spending on defense has dipped due to falling oil prices. The country projects a 6 percent reduction over three years, and it is down about 8 percent this year.

Russia’s 2017 defense budget of about 3 trillion rubles equates to around $50 billion U.S. dollars. But Kofman cautions that converting Russia’s figures to U.S. currency can be misleading. Russia doesn't buy anything in U.S. dollars so currency exchange falsely deflates the size of Russia's defense budget, he said.

In rubles, Russia's purchasing power is significant, said Kofman, so the 3 trillion ruble budget “buys quite a bit,” he said. “I expect their defense budget to increase after 2019, and some of the currently experienced cuts are still subject to negotiation depending on where oil prices go.”

Sandra Erwin is a national security and defense reporter for RealClearDefense (where this first appeared). She can be reached at [email protected]. Follow Sandra on Twitter @Sandra_I_Erwin.