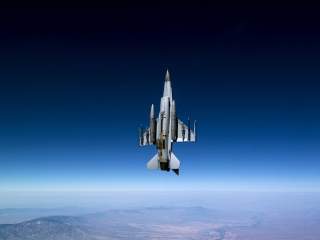 In the middle of June 2015, a U.S. Air Force F-16 fighter took off from an air base in Alaska and flew over a military training range at 430 miles per hour. On command, something burst from the fighter’s flare dispenser—a drone roughly the size of a soda can and weighing just one pound.

The tiny, orange- and black-colored robot fluttered toward the ground trailing a parachute. After a few seconds, the chute separated from the drone, the robot’s wings—which had folded into the body for compactness—extended outward. An inch-wide propeller began spinning, propelling the diminutive machine forward.

The drone is called “Perdix.” It’s the latest product of the Strategic Capabilities Office, a secretive Pentagon organization, formed in 2012, whose job is to find new ways to deploy existing weapons.

One of the office’s ideas is to transform F-16s and other fast jets into high-speed launchers for swarms of small drones that could confuse enemy defenses or perform surveillance.

“Just imagine an airplane going in against an [integrated air defense] system and dropping thirty of these out that form into a network and do crazy things,” Bob Work, the deputy defense secretary, told trade publication Breaking Defense. “We’ve tested this. We’ve tested it and it works.”

The Perdix drones are 3D-printed out of Kevlar and carbon-fiber. Powered by lithium-ion batteries—the same kind you’d find in a cell phone—the Perdixes launch from a standard flare dispenser, like on the F-16, F/A-18 and other warplanes.

Toughness was a key design requirement. A Perdix must survive forceful ejection from a high-speed launcher and right itself in turbulent winds.

The drones were originally developed by students at the Massachusetts Institute of Technology in 2011. The students tested the Perdixes from balloons and envisioned the small unmanned aerial vehicles supporting environmental monitoring.

But it was the military that was most interested in the tiny machines. The Virginia-based Strategic Capabilities Office—a twenty-six-person team led by William Roper, a physicist who previously worked for the military on missile defense—began experimenting with Perdix in 2014.

The Alaska sortie was the first in a rapid-fire series of flight tests. As part of the Northern Edge war game last June, fighters launched Perdix drones 72 times. After deploying, a swarm of potentially dozens of the Perdix robots connect via radio datalink—and pursue their objective.

“The specifics of what the mini-drones can do are classified, but they could be used to confuse enemy forces and carry out surveillance missions using equipment that costs much less than full-sized unmanned aircraft,” the Washington Post reported.

Fighter-launched robotic decoys are not new, per se. The F-16 was one of the first U.S. military aircraft to carry the Miniature Air-Launched Decoy, a roughly 10-foot-long, radar-spoofing drone, starting in the late 1990s.

The difference is the swarm. While an F-16 might launch only a couple of MALDs, the same plane could deploy up thirty Perdixes—thirty is the flare capacity of the standard ALE-47 countermeasures dispenser—making the smaller drones much harder to destroy and potentially much more effective.

Not to mention cheaper. A single ADM-160B MALD costs more than $300,000. Two years of testing involving potentially hundreds of Perdixes has cost the government just $20 million, thanks in part to the initiative’s heavy reliance on existing technology.

“We don’t have to develop fundamentally new weapons,” Roper told The Washington Post. “But we have to work the integration and the concept of operation. And then you have a completely new capability, but you don’t have to wait long at all.”