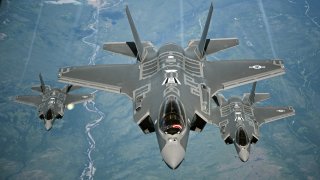 We all have that nephew in college who spends too much money on pizza, premium beer and maybe a cruise for Spring Break -- and then comes home begging for money from his parents. Let’s call him Pat.

Sadly, Pat’s plea is eerily similar to what we hear from Pentagon officials and their allies.

Yes, the Pentagon has the spending habits of a 20-year-old college student, and a host of enabling relatives that ensure there is no learning or maturing.

Take the recent revelations that the Pentagon ignored a report by an outside evaluator that it could save $125 billion by cutting back on “back office” staff. Or its decision to push ahead with the F-35 fighter jet program –which, with an estimated price tag of $400 billion and growing, is the most expensive weapons program in history, in addition to its extreme production delays—despite there being working weapons systems that could do the intended job without the problems. And yet, in spite of these incredible sums of potential savings, every year the Pentagon goes to Capitol Hill and asks for money. This process just played out once again, and once again, Congress acquiesced, passing a $618.7 billion defense authorization bill for 2017.

With an annual budget of more than half a trillion dollars, a decade-plus of precedent-setting funding levels and an off-the-books slush fund (Overseas Contingency Operations) for war expenses, the Pentagon cannot credibly cry poverty. (In fact, this cry is even more hollow given that the Pentagon does not even know how much it spends, since it is the only federal agency that has never conducted an audit.)

Nor can the Pentagon suggest any further cuts would eviscerate military readiness. To do so would be to ignore the $4 million the military spent on a single gas station, the 200 golf courses it operates including a half dozen in Florida alone, the billions that have been sunk into F-35s that do not work – the list goes on. There must be a hard look at what is necessary to have rather than what they’d like to have. And if the Pentagon cannot “self police” on this, then we must demand  an outside audit.

And so, like with Pat, it’s hard to swallow sky-is-falling rhetoric and complaints from the Department of Defense and its lieutenants. I, Tony,  used to be there, I know all the tricks: And we know, Susan and I, having watched from inside and out, the August-to-December spending spree to make sure budget levels remain the same or higher the next year; the sleight-of-hand when asked to cut something, you offer the most important item –like the college student reminding you that he has to buy books even though he had the money before the beer and pizza—and you assign anything “number-one priority status” the second someone looks at reducing costs on it.

So what to do?

Like Pat, the Pentagon should stop complaining and start making realistic plans to give up the nice-to-haves to pay for must-haves. And the Pentagon and its enablers should stop playing into politics and get back to its core strength – being the best defense planners in the world.

After all, America does not owe its strength or military greatness to explosive Pentagon budgets; in fact, as Admiral Mike Mullen and a blue-ribbon panel of other military authorities reiterated earlier this year, such huge budgets could be an albatross on our national security. Instead, it has been smart, often difficult, decisions about strategy and posture by U.S. military and civilian leadership that are responsible for American preeminence. Now our military and civilian leaders must step up once again.

Everyone else has to live within a budget. It’s time for the Pentagon to stop whining and do the same. Taking a magnifying glass to the Pentagon budget sheet and identifying programs to terminate or slow down, bases to close and contracts to trim may not make the Pentagon popular, especially not with special-interest lobbyists and big-spenders on both sides. But it will make the Pentagon better, and will put our country on a safer and more secure path. It is time for a more effective, not more expensive, Pentagon.

Susan Shaer is founder and co-chair of Win Without War and the former executive director of Women’s Action for New Directions (WAND), a national women's peace and security organization. Lt. Col. Tony Shaffer (retired) is a CIA-trained former senior intelligence officer and New York Times bestselling author of “Operation Dark Heart: Spycraft an Special Operations on the Frontlines of Afghanistan - And The Path to Victory."  His latest book is The Last Line. He is a senior fellow with both the London Center for Policy Research and the Center for Advanced Defense Studies. The opinions reflected here are those solely of Lt. Col. Shaffer -- and are not the opinion of the London Center for Policy Research (LCPR), the Center for Advanced Defense Studies (CADS) or of any other group or organization with which Lt. Col. Shaffer is affiliated.