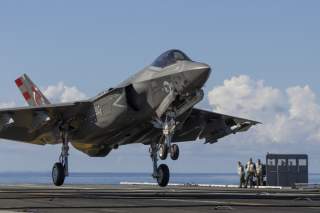 The definition of a critic is someone who knows the price of everything but the value of nothing. This description could readily be applied to the Defense Operational Test and Evaluation office. DOT&E is often described, erroneously, as the Pentagon’s weapons testers.  In reality, they test nothing. Rather, they are the green eyeshade people, like the goblins at Gringott’s in the Harry Potter series, who assess the progress of various major defense programs in meeting test requirements largely determined by the program offices and the services. Unfortunately, DOT&E is unable to assess a program’s progress except against a list of performance capabilities and a test schedule. If a system isn’t meeting all its performance measures, really its test points, on schedule, it is deficient.

So, on the same day, two reports on the F-35 program were published in the trade press. One, by the defense expert, Colin Clark, in BreakingDefense, reported that the Joint Strike Fighter program was on track to achieve more successful tests this month than at virtually any time in the program’s recent history. According to Clark:

The F-35 program completed 25 weapons tests in a month, a marked surge from the previous high of three in November 2014.

During the tests, some 30 weapons were dropped or fired, including the Joint Direct Attack Munition (JDAM), AIM-120 Missile, the Small Diameter Bomb (SDB), AIM-9X missile, the F-35’s Joint Program Office said in a statement.

“This was a tremendous effort by the F-35 test team,” Lt. Gen. Chris Bogdan, head of the F-35’s Joint Program Office, said in a statement. “They surged and worked seven days a week for more than a month to expend 30 ordnance and advance weapons testing. This testing has moved us that much closer to delivering the full F-35 capability to warfighters within the next two years.”

By the way, all these tests were conducted at installations that are essential parts of the Southwest Defense Complex.

The other report, by DOT&E, warned of problems existing with full testing of the F-35’s gun system, integrating the AIM-9X missile and additional software bugs. If one paid attention only to the DOT&E report, you could be left with the false impression that the program was continuing to fall behind the goals established for it and might even be characterized as a failure.

Just a week earlier, Patrick Tucker of DefenseOne published a story based on interviews with Navy pilots of the F-35C extolling the virtues of the platform’s software, the advanced features of the Joint Strike Fighter’s sensor suite, data fusion capability and ability to exchange processed information with other aircraft in the strike package. But what is equally noteworthy is the F-35’s advanced avionics. In the words of these Navy pilots:

Naval aviators say guiding the F-35 Joint Strike Fighter onto the flight deck of U.S. aircraft carrier is almost like flying a plane that flies itself. The new plane’s software is meant to allow the military to train pilots faster and, in war, fly more sorties against the enemy. ...

“The aircraft does a lot of stuff that, before, I would have to fight the aircraft,” said Marine Maj. Eric Northam with the VX-23 test squadron. The jet’s Delta Flight Path software, created by F-35 manufacturer Lockheed Martin has changed all that. “If I want to capture the barrier altitude that I’m climbing to … I dial in the altitude; it will climb up and capture it. If I want to capture the heading I can just use the pedals to dial in a new heading. I can keep my hands on the controls where I need to and then redirect the aircraft as required.”

The more pilots get a chance to work with the three variants of the F-35 the clearer it becomes that this is a revolutionary platform. Its ability to operate undetected in hostile airspace, gathering information and even targeting data on enemy air and ground targets, before launching surprise attacks demonstrates a decisive advantage over existing threat systems. Some senior military officers have characterized engagements involving F-35s against high-end fourth-generation fighters as demoralizing for the pilots’ of the latter.

It is time for DOT&E to drink a glass that is three-quarters full. The Joint Strike Fighter test program is making progress at an accelerated rate. More to the point, even before it has completed the rigid performance template laid out by DOT&E, the F-35 has demonstrated capabilities that far exceed any current Western fighter.