A Perfect Solution to Nuclear Talks with Iran: A Deal Deemed Imperfect by All 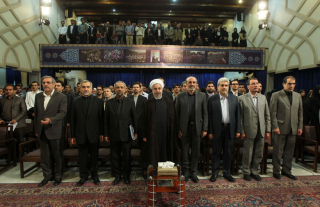 In today’s Middle East, dysfunction is a bigger enemy than hostile states. The United States needs as many partners as possible in this part of the world to tackle the current chaos. Relations between Iran, a dominant state in the region, and the West are today at a vital crossroads. Reaching a deal with Tehran will not only constrain its nuclear program, but potentially pave the way for engagement on regional security issues.

The rise of ISIS and the instability left behind by the Arab Spring has cemented dysfunction in the Middle East. While hostile states are undesirable, deterring or defeating them is still within the realm of possibilities for a country like the United States. But no one has a solution to utter chaos.

Strong regional partners are vital to managing the current disorder. States like Turkey and Saudi Arabia partially fulfill that role. But Iran is a dominant state in the region. It is large, resource rich and a potentially powerful partner in an unstable region. It is the largest country in the Middle East with the capacity to pursue a serious international agenda. A nonhostile relationship with a Tehran who could be convinced not to want nuclear weapons would be worth its weight in gold.

The future course of the West’s relationship with Iran hangs on reaching a nuclear deal. For better or worst, meaningful dialogue with Iran is predicated on resolving this issue—all other problems have taken a back seat over the past two decades. If the negotiators aren’t able to bridge their differences, then there will be little future dialogue with Iran.

Aside from constraining Iran’s nuclear activities, a deal would boost President Rouhani’s more moderate agenda domestically. While a strong, liberal and independent Iran will naturally pursue its own interests, it will be more sympathetic to Western goals if it develops ties with the EU and the United States. Iran could be coaxed into a role as part of the international community, not in opposition to it. Dialogue could become the norm, rather than the exception.

In Iraq, both sides are conscious of the role the other can take in effectively tackling ISIS. Washington and Tehran share the same goals: avoid Iraq’s partition and defeat ISIS. Iran is more committed to Iraq than any other regional player. Last time Iraq’s interests were fundamentally opposed to Iran’s there was a devastating, eight-year-long war. Not only does ISIS threaten Iran’s interests in Iraq, but it poses a direct threat to Iran’s borders—something Iran hasn’t seen in a long time.

ISIS can’t be defeated with just U.S.-led airstrikes. The coalition needs local and regional support. Of course, it’s politically impossible for either side to openly cooperate with one another. No one envisages joint combat roles, but instead separate and complementary tactical approaches and coordination between the coalition and Iran to effectively tackle ISIS. But very little can be done until the nuclear file has been dealt with.

If there is no deal, the hardliners in Tehran will be strengthened. The failure of the talks will be attributed to the West and their “excessive demands.” Tehran will turn away from the United States and the EU towards countries that are less selective in their foreign relations, such as China and Russia. Iran will continue its often-obstructive foreign policy, because it will have little interest in contributing to Western foreign-policy goals in the region.

It’s imperative that both sides explore all avenues for overlap in the nuclear talks. Tehran believes the P5+1’s demands are “excessive.” For Iran, the key issue is to avoid the reality or appearance of coercion. What would happen to President Obama if he appeared to give in to bullying by a foreign power? The same goes for Tehran—it can’t accept a deal that makes it look like it said “yes” with its tail between its legs.

But the P5+1 seems to have a more flexible negotiating position than the Iranians give it credit for. If the P5+1 can effectively communicate this to Iran, then a settlement is plausibly within reach.

By definition, a successful agreement will be one where neither side feels it has achieved a perfect deal. But if the P5+1 and Iran reach a comprehensive deal, it will constrain Iran’s nuclear program, boost Rouhani’s liberalism in Iran and pave the way for a new era where the West can more comfortably coordinate with Iran on regional crises. Everyone will be better off.