Perrys to the Rescue: Could the U.S. Navy's Retired Frigates Make a Comeback? 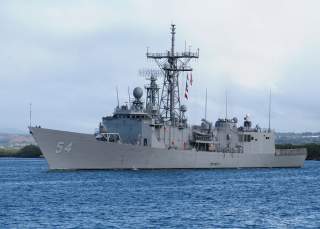 The U.S. Navy’s venerable Oliver Hazard Perry-class frigate made a splash at the U.S. Naval War College’s Current Strategy Forum last week when Chief of Naval Operations John Richardson publicly acknowledged that his service is taking “a hard look” at options to rehabilitate, modernize and recommission seven or eight of its inventory of the now-retired ships.

This news comes as the Navy is pushing to quickly grow to a 355-ship battle force so that it can face down the daunting new threat matrix of the 4+1—a combination of technological peer competitors and regional adversaries, namely Russia, China, Iran and North Korea, along with the persistent threat of transnational terrorism. During the question-and-answer portion of the forum, Admiral Richardson discussed ways to move toward that 355-ship battle force by pulling existing ships out of mothballs.

“We’ve got to be thoughtful about this. In this exponential world, a lot has changed. The ones that we’re taking a hard look at are the Oliver Hazard Perry-class frigates. There are about seven or eight of those that we think we could take a look at. But those are some old ships, and the technology on those ships is old, and in these exponential types of environments a lot has changed since we last modernized those . . . The other part is just life extension, so we sort of plan to keep them out of mothballs longer, and that’s going to be money in the bank if we do that. So it’s really going to be a cost-benefit analysis of: how much is it going to cost to modernize these things and make them relevant for the amount of life we’re going to get out of them.”

Several American allies have experience modernizing their Perry-class inventories. Turkish efforts to update their inventory of “short hull” Perrys have reportedly done well in the G-class. The Australians, meanwhile, ran into significant programmatic issues that put the work on their Adelaide-class frigate four years behind schedule, continuing an unfortunate pattern in recent Australian naval shipbuilding but nevertheless producing a similarly potent platform as Turkey. Both navies installed updated combat-management systems, new air-search radars, and more integrated sonar equipment, while adapting the rotary magazine of the ships’ Mark 13 single-arm missile launcher to accept the longer range and higher performing SM-2 surface-to-air missile in lieu of the older SM-1. The two U.S. treaty allies also added an eight-cell tactical-length module of the Mark 41 Vertical Launch System forward of the Mark 13 mount to field thirty-two Evolved Sea Sparrow Missiles, medium-range surface-to-air weapons that boast exceptional capability against maneuvering supersonic sea-skimming threats. The upgrades installed by both navies have given their respective fleets of Perrys a combat capacity and modernized capability disproportionate to their small size and advancing age.

The U.S. Navy diverged from these two fellow Perry operators in the early 2000s, a period of American naval supremacy and complacency in the post-Cold War era, when it chose to downgrade rather than upgrade its frigate fleet. This move reflected a consensus that the American victory at sea in the Cold War was a final one, that the United States would not face another peer challenge to its mastery of the oceans for decades, and that maintaining capabilities and competencies for high-end battle at sea had therefore become essentially unnecessary. By removing the topside elements of the Perrys’ Mark 13 missile launcher and welding over its empty below-deck missile magazine, the service left their frigates denuded of any anti-air or anti-ship capability beyond the 76-millimeter main gun battery and the 20-millimeter Close-In Weapons System. This rendered the ships incapable of protecting other vessels against modern threats and unable to operate in an adverse environment without the broad anti-air coverage of an Aegis-equipped destroyer or cruiser. The Navy placed aboard some of the younger members of the class an additional Mark 38 25-millimeter autocannon above the former Mark 13 mount to better facilitate the frigates’ new line of constabulary work as low-end presence and maritime-security platforms tasked with drug-interdiction off South America and counterpiracy off the Horn of Africa. In this reduced capacity, the frigates were effective, seizing significant quantities of cocaine in the Caribbean and famously aiding in the rescue of Captain Richard Phillips from four Somali pirates in the 2009 Maersk Alabama incident.

The Perrys were supposed to be replaced by another product of post–Cold War overconfidence, the Littoral Combat Ship, which would leverage seemingly permanent American naval superiority to project power ashore from coastal waters. The two variants of the Littoral Combat Ship have proved deeply troubled classes that have remained, until recently, even more poorly armed than their antecedents had become after they were defanged. The new coastal combatants have also been evaluated as significantly less survivable than the Perrys, which proved their mettle in the treacherous threat environment of the littorals on multiple occasions. While patrolling the Persian Gulf in May 1987, USS Stark took two Iraqi Exocets below her bridge and survived to fight another day despite suffering the grievous loss of thirty-seven sailors killed and twenty-one wounded. Eleven months later, in the same waters between Qatar and Iran where her sister ship had been struck, USS Samuel B. Roberts was dealt what should have been a fatal blow on April 14, 1988, when her keel was broken and her engines disabled by an Iranian contact mine. Still, she managed to remain afloat and combat capable, which allowed her to ward off a skulking Iranian frigate and maritime patrol aircraft. After five hours of strenuous damage-control efforts by her well-prepared and determined crew, Samuel B. Roberts extricated herself from the minefield under her own auxiliary power at five knots, having astonishingly sustained no loss of life during her ordeal. Another Perry, the USS Simpson, then helped extract retribution for Roberts’ mining four days later, sinking an Iranian fast-attack craft with a volley of SM-1s fired from her Mark 13 missile rail (Simpson’s retirement in 2015 left USS Constitution as the only U.S. Navy warship in commission to have sunk an enemy vessel in combat with shipboard weaponry). As a damage-control case study, the Samuel B. Roberts episode has been used as a reference point to the tragic experience of Arleigh Burke-class destroyer USS Fitzgerald this past weekend, which was accidentally rammed by container ship ACX Crystal causing severe physical damage to the destroyer and the deaths of seven sailors, the youngest of whom was nineteen years old.

It is unclear whether the U.S. Navy is looking at installing modern Mark 41 Vertical Launch Systems, either by following the Australian and Turkish models of mounting one module forward of the former Mark 13 mount, or by removing the Mark 13’s remaining below-deck gear, which had been left in place when the topside missile rail was removed. The Mark 13’s place in the Perry hull suggests that an investment of this nature might require a reengineering of the bow to remove the existing rotary-missile magazine, make room for the new vertical-launch modules by reworking the spaces around the Mark 13, and ensure the new bow has adequate structural strength without the support of the Mark 13 magazine’s below-deck casing. The class is certainly no stranger to unorthodox modular rehabilitation methods—after the mining of USS Samuel B. Roberts, Bath Iron Works chose to cut out and remove the ship’s damaged engine room, build a replacement and then hoist the new module into the hull.

The result of a successful American Perry refit could be a robust and powerfully armed frigate equipped with between eight and twenty-four tactical-length vertical launch cells capable of carrying weapons spanning from the quad-packed Evolved Sea Sparrow Missile, to rocket-boosted antisubmarine torpedoes, to medium-range variants of larger multipurpose Standard Missiles. Such a weapons suite would return the frigates to their former place as formidable platforms for contesting and exercising sea control in medium threat environments against peer technological adversaries. With upgrades and refurbishments to information processing systems, sensors, and operating equipment, they would likely be able to give a good accounting of themselves in a variety of scenarios, whether against similar foreign counterparts, like the Chinese Type 054A, as part of larger fleet actions, or in their legacy roles as ocean escorts and antisubmarine warfare hunters. Perrys so refitted would also likely be able to put to sea much faster than the future product of the design competition being held by the Navy Frigate Requirements Evaluation Team. However, the Navy may decide that such an extensive rebuild would be too technically risky or too great an investment into ships that are, as The Maritime Executive puts it, “notoriously hard to sink,” but nevertheless twenty-five years into their service lives.

Looking back, the compound decision to remove the Mark 13 missile rail and rush the Perrys out of service in favor of an ill-conceived and inadequately armed littoral combatant reflects poorly on a Navy that had fallen into the trap of triumphalism and allowed its core competencies to wither after the end of the Cold War. This great delusion of the first decade of the twenty-first century, that the United States would never again have to fight for command of the sea against a determined peer foe, has left the Navy scrambling to regain its traditional footing as it faces down not one, but two competitors in the growing, modernizing fleets of China and Russia. Though he could not know the degree of ironic understatement that would be attached to his words by the passage of time, Commander Chan Swallow of USS Nicholas perhaps encapsulated it best in 2003 when he described the Navy’s decision to the Stars and Stripes: “We’re taking a small risk here.”