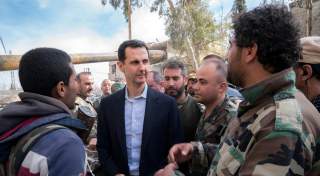 Situated between Middle and Near East ﬂashpoints, Syria has been involved in conflicts stretching from Iraq to Israel-Palestine, Lebanon, and Iran. Regional conflicts and the Arab Spring also had an undeniable effect on Syria, especially because the country’s civil war represents a larger geostrategic struggle between Great Powers (namely, the United States and Russia) and regional hegemons (Turkey and Iran). For almost seven years, the war has taken an enormous toll on the Syrian people: there has been genocide and other mass atrocities, including multiple chemical attacks and unrelenting aerial bombardments; destruction of major infrastructures; near complete degradation of health services, electricity, water services, sanitation services, critical infrastructures, businesses, and residential neighborhoods in and surrounding the cities of Damascus, Homs, Aleppo, and eastern Ghouta; Syria’s Gross Domestic Product tumbled to an estimated $14 billion in 2015, an estimated $46 billion decrease since the 2010 pre-conflict period; Syria now ranks 178th out of 180 countries for corruption and nearly half the population is unemployed; and Syria’s population is fragmented along ethno-religious fault lines which have been intensified by Russian and Iranian interference.

It is within this context that Secretary of State Rex Tillerson said in February 2018 that the United States and Russia share an amenable vision for peace in Syria. Integral to peace building are stabilization and reconstruction efforts. In the continuum of military operations, these efforts fall under Phase IV postconflict, because they involve stabilization and reconstruction efforts, and culminate in (re)establishment of legitimate civil authority. The problem in Syria is that the Assad regime will stay put. Since the beginning of the civil conflict Assad has held his ground, and his strategy has included selective co-option and deal-making with opposition groups as well as the punishment of dissidents. There is a strong likelihood that the regime, assisted by Iran and Russia, will win the Syrian civil war through military means. The Assad regime survived after losing nearly half its territory. Now that it has taken most of it back, it is unlikely that the regime will budge. If this is what comes to pass, then the stabilization and reconstruction process will be exploited by the Assad regime without making meaningful and lasting political compromises with regard to Syrian governance.

The Assad regime’s strategy will be to reinforce the regime's stronghold, favor partisans, and penalize perceived or real resistance factions by forcing displacement, dividing ethnic groups, and reconfiguring Syrian society. Various think tanks and international organizations estimate that the Syrian reconstruction will cost between $200–500 billion. The Assad regime claims that it can cover $8–13 billion of the reconstruction costs and it will only allow those countries (e.g. Russia, Iran, Lebanon and China) that supported the regime to participate in the reconstruction bidding.

Assad is reestablishing an economy that will benefit the regime and its loyalists over opposition groups and their controlled territories. For example, the regime is clearing the neighborhoods outside of Damascus and Homs of the poor and mostly Sunni rivals. The denial of critical infrastructure and social services will have a consequential effect on Syria's population, who continue to flee the war-ravaged nation. There are no other institutions left to fill this void. The belief that Daesh (ISIS) has been "defeated" must not be oversimplified. ISIS is a complex, organic organization, and only the proto-state element—such as the physical Caliphate—has been demolished. However, the ideologies and relative deprivation that set the stage for ISIS and similar groups continue to flourish. If the Assad regime benefits from Western reconstruction efforts, then groups such as ISIS, which are losing control and influence, will claim that "the West" does not care about Syrians. There are also social, economic and political reasons for the slow reconstruction efforts in Syria: refugees are unable to return home; the continuing humanitarian disaster gives extremist groups a vibrant pool of recruits; low-intensity violence continues to serve as an ISIS training ground; regional geopolitical opportunities remain for Iran and Russia to exploit; Turkey is increasingly emboldened to take action against regional Kurdish populations; and Assad is reestablishing his control over the country.

President Donald Trump must devise a political strategy on how to stabilize and rebuild Syria. The “Friends of Syria” coalition has frozen $9.6 billion in assets until Assad is removed from political power. U.S. policy makers must decide whether to support Syria reconstruction efforts in opposition areas if a political transition does not occur. If so, U.S. decision makers must scrutinize the conventional foundations of postconflict stabilization and reconstruction because they will not be negotiating with a state or regime actor.

It should not be forgotten that reconstruction deepens socioeconomic inequalities that pre-exist conflicts. Therefore, a complete assessment of Syrian reconstruction plans must be undertaken. The war in Syria has produced a cohort of politicians, capitalists, and militia commanders who not only demand to be part of the reconstruction process but will also seek rewards. Can these elites evolve into statesmen and "civilized" businessmen? If still in power, can the Assad regime be influenced, pressured and/or encouraged to work to achieve outcomes that it normally would resist? If the stabilization and reconstruction process does not address all of these variables, the conflict will persist and extremism will continue to flourish.

Mir Sadat, PhD, is a naval officer currently assigned to the Chief of Naval Operations and has spent almost two decades on Middle East/South Asia geostrategic issues. His opinions are his own, and do not reflect the official policy or position of the U.S. government or any of its Departments/Agencies. Follow him on Twitter: @Dr_Sadat_USN.