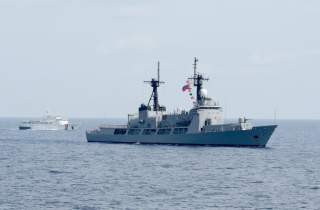 International law is only as valid as it is enforceable. If this statement were true, then the upcoming ruling of the arbitral tribunal between the Philippines and China would likely be another nail in the coffin of international law in an anarchic international system, where law is only another arrow in the quiver of power-hungry nations. But it is not that simple. In fact, the case brought forward by the Philippines is about way more than the legal nature of the so-called nine-dash line or the status of the submerged rocks and reefs China mistakenly interprets as islands according to Article 121 of UNCLOS (United Nations Convention of the Law and the Sea). This fact is not changed by other claimants making the same mistake or a few countries—“convinced” by China—reasserting the legality of the island status. In fact, it is about the potential role of international law in conflict resolution and international affairs.

Clearly, there are vastly differing views concerning the role of international legal proceedings.  On the one hand, as stated by the Philippine Foreign Secretary del Rosario, the dispute resolution mechanisms provided for by UNCLOS “allow the weak to challenge the powerful on an equal footing.” On the other hand, prominent Chinese scholar Wu Shicun argued that the arbitral case actually could exacerbate existing tensions. Furthermore, China already stated that it would not adhere to the decision made by the tribunal as it does not accept its jurisdiction. But while some therefore argue that the only damage for China could be reputational, this is not entirely correct. It is indeed a case in which international law is on trial, but one major factor is largely unaccounted for: the impact on China’s soft power.

China is on the rise, economically, militarily, in almost all categories. Yet power does, as Joseph Nye continuously points out, not solely come from the hard power factors of economic or military might. In fact, the ability to attract others to follow one’s lead is a vital component of true power.

When it comes to soft power, the Chinese leadership still fails to comprehend the baseline that soft power is nothing one can orchestrate through a government-planned strategy or high-profile investments. It comes from the people and civil society. This might be countered by Chinese officials who were proud to claim that Russia, Belarus, Brunei, Cambodia and Laos have come out to support its position in the South China Sea arbitration case. But these countries were not attracted to China’s position due to a shared love for the Chinese interpretation of UNCLOS. Unlike some Chinese journalists suggest, this support is not about soft power. Those nations are compelled to take China’s side because of hard power considerations, because of their political or economic interests.

The upcoming ruling will therefore not be about the frequently discussed questions of whether China will adapt its behavior. Any expectation that China might clarify the nature of the nine dash line or step back from the absurd notion that one can reclaim land on submerged features and turn them into islands that generate an EEZ is illusory. It was clear from the onset that this would not happen. On the contrary, China will likely begin dredging at Scarborough Shoal, close to the Filipino shore, as another step in fortifying its rocks, islets and outposts in the South China Sea and building the “Great Wall of Sand”. But for all those seeing this as the ultimate sign of failure international arbitration, caution is advised.

Instead of lamenting about the inability to enforce the outcome of the tribunal, one should focus on what it says about the Chinese understanding of power and its willingness to play its part in a rules-based international system. Xi Jinping is currently showing his willingness to resort to lawfare in an attempt to ensure that the Chinese interpretation of the law of the sea is followed by other states in its proximity, be they ASEAN members such as Cambodia and Laos or countries not involved in the South China Sea dispute—obviously—such as Belarus. But this is only a continuation of the hard power game China is playing through its economic investments overseas and its military modernization and power projection.

On the soft power side however, China is losing the power upsurge it might otherwise have been able to proclaim. The Chinese disregard of the proceedings by the arbitral tribunal is set to further weaken the trust other nations will have in China’s willingness to adhere to a common set of rules and play its part in a rules-based global society. Any increase in hard power will be offset by a loss in soft power.

Moving away from the case of China and towards the overarching question of the role of international law, there is no easy answer. Most likely, international law will both win and lose the case. It will lose as the case will show once again the inability to enforce rulings by international tribunals, a major weakness of these mechanisms. Big in words and principles, there are often few actions following such decisions. However, it is too early to pronounce the defeat of international law. As this case proves, the norms allow states no matter their size to engage on a more neutral and equal playing field than the disputed waters of the SCS and it forces them to win “hearts and minds” in the international community. Everyone following the case becomes judge and jury and will take sides, with a bias for the small and weak, thus offering them a soft power advantage. The arena of international law is generally less impressed by hard power actions or intimidated by economic and military might. In the symbiosis of soft and hard power, international law is an underestimated factor with a lot of potential if played right.

Frauke Renz is Visiting Researcher at Georgetown Law as well as Non-Resident Pacific Forum CSIS WSD-Handa Fellow and is pursuing her PhD in International Law. She is founder of IR.Asia.