A Plan to Save the East China Sea from Disaster 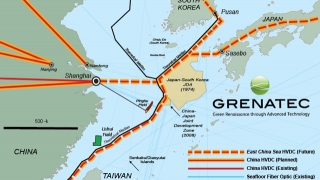 But there could be a way to move towards a resolution (see the graph above). The model here is the Internet.

In the past 25 years, the Internet has dissolved borders, increased trade and spawned innovation in every field. In the next 25 years, an ‘Internet of Energy’ can link Northeast Asia’s neighboring economies -- creating powerful new constituencies for diplomatic stability.

Amid all the claims to water, sky and rocks in the East China Sea, we don’t hear similar claims being to the subsea fiber optic cables. The South China Sea and East China Sea now host two of the densest meshes of sea-bottom fiber optic cables anywhere in the world. These now generate more economic wealth each day than any stretch of open water or uninhabited rock ever will.

This, of course, underscores the large gains to be had from multilateral, ‘positive sum’ thinking.

China, Japan and South Korea have a collective annual economic output roughly $16 trillion -- or about one quarter of global GDP. Interconnecting their power grid, gas pipeline and fiber optic systems across the East China Sea makes more sense than anywhere else in Asia.

In the East China Sea, a gas pipeline already stretches halfway from China to Japan. It connects Shanghai to the Pinghu Field. This means both fiber optics and natural gas pipelines already extend halfway across the South China Sea between China and Japan. Power lines could follow, using Chinese HVDC technology. A number of proposals already have been along these lines.

One possible topology would be to lay the infrastructure along the geographic ‘median line’ equidistant from each country’s mainland shorelines. This line already has been used by China, Japan and South Korea to agree on the boundaries of two Joint Development Areas. To date, unfortunately, neither has developed very far.

Progress on the China-Japan JDA stopped in late 2010 after a collision between a Chinese fishing boat and a Japanese Coast Guard vessel. Meanwhile, progress on Japan and South Korea’s JDA has been slowed by mistrust. But these should be surmountable if the prize is wealth-creating economic growth in which all share.

Meshing China’s infrastructure-building expertise with Japanese advanced technology and South Korean selective excellence in areas like tidal energy can create a winning situation all around. This is particularly so given the expansion of funding entities for future infrastructure investment. These range from China’s proposed Asian Infrastructure Investment Bank, the so-called BRICS Bank, and the South Korea-based Green Climate Fund. Multilateral meetings later this year in Asia such as APEC and the G20, also offer opportunity.

Examples of this include joint East China Sea drills held by Japan and South Korea late last year, China’s recent participation in multilateral naval exercises off Hawaii, and plans for US, Chinese and Australian soldiers to participate in joint maneuvers in October in Northern Australia.

Applying this model to the East China Sea, the navies of China, Japan and South Korea could cooperate in providing security to key subsea and surface infrastructure. This could be done by dispatching ships as needed from Shanghai as well as South Korea’s Pusan naval base and Japan’s Sasebo naval base in Fukuoka.

An example of the benefits of such cooperation occurred after the devastating 2011 Fukushima earthquake. This damaged important subsea-fiber optic cables off Japan that carried data from Asia to North America were severed off Japan. A regionally-based telecommunications salvage vessel dispatched out of Shanghai repaired the cable. The same model could apply to energy infrastructure.

All of this points to the powerful economic impetus created by networks, and the potential they have to encourage growth, battle climate change and reduce tension. What’s needed now is to mesh this vision into those for investing in infrastructure and economic reform.