This Plane Could Make the Russian Air Force Even More Lethal 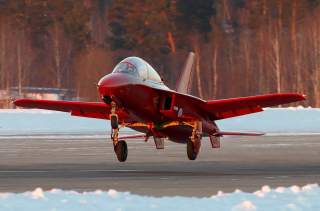 Developed initially as a private venture by КБ Современные Авиационные Технологии (KB-SAT or Modern Aviation Technologies in English), the diminutive forward swept-wing SR-10 is a unique endeavor that seems to have found success. The Russian Air Force intends to purchase the SR-10 as a replacement for its fleet of Soviet-era Czechoslovakian-built Aero Vodochody L-39 Albatros jet trainers.

The SR-10 made its debut earlier this year at the MAKS 2017 airshow outside of Moscow earlier this year. The aircraft is simple and cheap and should provide the Russian Air Force with an inexpensive intermediate jet trainer to fill the gap between the Yakovlev Yak-152 piston-engine primary trainer and the high-end Yakovlev Yak-130 Mitten advanced jet trainer, which is closer in performance to a true combat aircraft.

Indeed, as Vladimir Karnozov reported for the trade journal Aviation International News, the SR-10 will likely take over the bulk of the pilot training mission for the Russian Air Force.

“The Russian air force intends to use the SR-10 as a direct replacement for the Aero L-39 Albatros for both initial and main pilot training courses,” Karnozov wrote. “The larger Yak-130 will be confined to weapons training, and the smaller Yak-152 to a pilot-screening role.”

According to Karnozov’s report, KB-SAT first displayed a composite airframe at the MAKS-2009 airshow that would eventually evolve into the SR-10 nearly a decade ago, but without much expectation of success. In 2014, the private venture passed a Russian Ministry of Defense preliminary evaluation and the program seem to have proceeded smoothly from there—with one exception.

“The first prototype rolled out in August 2015 and took to the air for the first time in December,” Karnozov wrote. “Test flights proceeded well, and in summer 2016 the Russian Air and Space Force (VKS) made the decision to financially support the SR-10 project and subject the prototypes to state evaluation trials at the Kubinka AFB.”

The SR-10 appears to be a fairly capable aircraft with excellent slow speed high angle of attack performance thanks to its forward swept wings—the technology for which is likely derived from the experimental 1990s-era Sukhoi S-37/Su-47 Berkut. It is also a 9-G rated airframe and high thrust-to-weight ratio thanks to its 3,860lbs thrust Ivchenko/Motor-Sich AI-25TL engine.

The problem, however, is that the SR-10’s Ukrainian-built Ivchenko engine will have to be replaced thanks to the complete breakdown in relations following the 2014 imbroglio between Russia and Ukraine, which disrupted the old Soviet-era supply chains. As such, for the production version of the SR-10, SAT will use the 3880lbs thrust NPO Saturn AL-55, which was developed for the Indian Hindustan Aeronautics Limited (HAL) HJT-36 Sitara Intermediate Jet Trainer.

Meanwhile, KB-SAT has started to work on an unmanned version of the SR-10 called the AR-10 Argument, which is designed to do everything from reconnaissance to strike missions. Potentially, that heralds a bright future for KB-SAT.

What separates out the KB-SAT and its SR-10 and AR-10 is that it shows that Russia is innovating. While entities such as Sukhoi and RSK-MiG have their origins in the Soviet-era, the KB-SAT is a private venture—the first such Russian enterprise—and using new innovative technologies in novel ways. Thus, it is perhaps indication of what is to come as Russia moves away from the legacy of the Soviet Union.