"Playing Fort" in the South China Sea and Spratly Islands 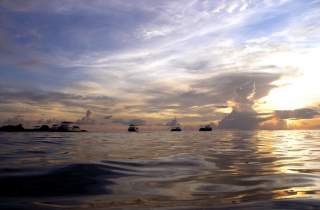 The South China Sea is filling up with surreal ocean castles. Hundreds of miles from land, on rocks and spits of sand, structures of concrete and steel rise straight up out of the water and stand guard over empty, open water. Tiny specks of solid ground like Fiery Cross Reef, Len Dao Island and Ardasier Bank have been turned into miniature fortresses, built to withstand the sea more than any human enemy. Some are circular concrete towers; others are low concrete squares or wooden shacks on stilts. Surrounded by the sea, they are like little worlds all to themselves, inhabited by at most a few dozen marines or soldiers who step out their front door into the middle of the sea.

These strange, lonely structures are physical markers of the claims that China, the Philippines, Vietnam and Malaysia make on the Spratly Islands. The geopolitical contest for control of the South China Sea determines their very physical structure: wherever possible, these structures have a solid structural foundation on rocks or reefs, allowing the building nation to make a legal claim based on occupation of a geological structure that connects to surrounding undersea features.

China’s open-ocean garrisons are the most heavily fortified in the region. They are almost exclusively built of concrete that entirely covers the reefs and rocks they’re built on, equipped with powerful radars, helicopter pads and 40mm antiaircraft guns. At the other end of the spectrum, one Filipino garrison guards its reef from the rusting hulk of a WWII freighter run aground. The Vietnamese, Chinese and Filipino outposts are scattered randomly onto as many reefs and atolls as they could occupy throughout the archipelago, reflecting the aggressive, zero-sum nature of these countries’ claims, while Malaysia’s outposts are confined to the sector of the Spratlys that Malaysia claims.

The very absurdity of building a minifortress on a semisubmerged rock hundreds of miles from land is indicative of how seriously these countries treat this dispute. The Spratlys dispute is about sovereignty, and these countries, just now finding their feet as nation-states and regional powers, are trying to demonstrate that they will go to any length to defend their sovereignty, even if it means fortifying a worthless, shifting sandbar with a force of five men. The reef outposts are objects of great nationalist pride, particularly among small but active groups of citizens. The Filipino and Vietnamese garrisons are partially supplied by civilian patriotic organizations.

All parties to the Spratly dispute are building up their presence in the region. Taiwan is reinforcing the islands it occupies, China is building an airfield on Johnson South Reef, the Philippines is holding large wargames in the area with the United States, and Vietnam has copied the Philippines and appointed a “mayor” to symbolically administer the archipelago. Compared to the diplomacy around them, life in the outposts must be positively tranquil; while the politicians battle back and forth, the marines can just sit back and watch the bright blue waves break. Let’s hope it stays that way.

Jack Mulcaire is a former researcher for the Center for the National Interest and analyst at Nomadic Capital Partners.