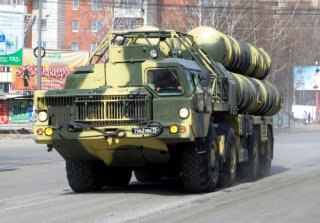 Satellite imagery confirms that Russia delivered new surface-to-air missile systems to Belarus, its frontline ally and last Eastern European buffer state. It’s a further sign the resurgent power’s strategy to shore up and integrate the two countries’ air defense networks is going ahead as planned, even with the recent friction in the relationship.

The satellite imagery, some of which Google Earth published last week, indicates the presence of additional S-300 near Polatsk and Grodno, locations running along the Poland and Lithuania borders. Both sites are important defensive positions, which could threaten NATO airpower, should the two come to blows.

Despite relative peace since the end of the Cold War, developments over the last decade suggest conflict is increasingly possible. Since Russia’s brief war with Georgia in 2008, the Baltic countries—comprised of Estonia, Latvia, and Lithuania—and Poland urged NATO to set up plans for their defense. Diplomatic cables published by Wikileaks outlined the whole secret affair. Russia’s more recent aggression against Ukraine, with the latter’s loss of Crimea, brings Russia’s intent for its Western flank back to the fore—to say nothing of its grander geopolitical ambitions.

With talks of a new Cold War circling Washington’s think tanks, the transfer of new surface-to-air missile systems to Belarus remains a notable event for observers. While Russia promised the systems years ago, it would appear increased tensions between NATO and the oil producing giant proved to be the tipping point for their delivery. And now the systems are operationally deployed in newly renovated sites, bolstering the two countries’ defensive capabilities.

The S-300, a mobile strategic SAM system conceived in the late 1960s, has been Russia’s go-to platform to protect allies and territory it wants to control.  Previous space snapshots showed the system deploying early on in conflicts in Georgia and Ukraine. More recently, as tensions in the Black Sea ramped up, Russia jumped at least one S-300 from Hvardiyske airfield in the middle of Crimea to Sevastopol on the coast. The move gave Russia the capability to acquire targets farther out to sea and more generally put pressure on NATO’s comfort level for operating at safe distances. Similar logic can be applied to the recent movements in Belarus.

The April satellite imagery available in Google Earth of Polatsk shows a significant escalation of assets in the northwestern part of the country. Stationed at a former S-200 (SA-5) site, a total of twenty transporter erector launchers (or TELs) were present in the space imagery. (A typical battalion sports six launch vehicles.) Ten of the TELs were on full alert, with their missile canisters elevated vertically in the firing position.  Four others had their launch canisters removed but were still parked in recently constructed launch revetments. Russia has said it would transfer two battalions to the defensive location.

Previous imagery shows that Belarus began preparing the site for new deployments in late 2014, with renovations to the S-200’s northern launch area completed by 2015. At the time, a “light” S-300 battalion, comprised of four launch vehicles, relocated to a support area, while the southern launch site still hosted an S-200 unit.  A year later, the southern launch area’s renovations were complete, the S-200 unit was relocated, and sixteen additional S-300 batteries were visible.

In total, the fully armed site, located less than 50 miles from the Latvian border, is capable of launching up to 80 missiles, four for each launcher. However, the site currently has prepared firing positions for sixteen batteries, which suggests the remaining four—possibly a jumped Belarusian unit—may relocate at some point. Luckily, we’ve managed to get a glimpse of where they might go.

Additional commercial satellite imagery also reviewed by the National Interest shows similar construction activity at sites at Brest and Grodno. New drive-through launch revetments typically associated with the S-300 were constructed since 2014. The construction activity in Grodno, also located at an early warning (EW) radar site, was still ongoing in 2016. However, recent imagery from May showed a single battalion of six TELs deployed at the EW site, adjacent to the new launch revetments. Five of the six TELs were in alert status with raised missile canisters, while the sixth had its canisters removed.

As for the other site at Brest, updated imagery from 2016 could not be acquired for analysis at this time. However, Russia has said it would reinforce both locations, with a new battalion each. Interestingly, the site at Grodno has prepared firing positions for at least two battalions. This suggests Russia could send additional launch vehicles or alternatively Belarus could jump another unit to the location should tensions increase.

The new units will support the combat duties outlined under the joint air defense agreement. Originally signed in 2009, Moscow and Minsk ratified the arrangement in February 2012, after much wrangling. For years, Russia has used the transfer and manufacture of defense equipment as a bargaining chip to gain concessions from its smaller neighbor, among other levers of power. Russia, for example, remains Belarus’s primary export destination and an important source of financial aid.

In exchange for the new S-300, Russia expected to gain access to an airfield to forward deploy a full squadron of fighters. However, Belarusian President Alexander Lukashenko managed to roll-back the airbase commitment in the face of growing Russian pressure. Lukashenko even used the guise of the October elections, when he “won” his fifth consecutive term, to support the countermove. At the time, he publicly questioned the need for additional bases, placating the local opposition, as the issue gained greater media attention. Nonetheless, while a full squadron hasn’t materialized, Russia did succeed in getting a flight of four SU-27 Flanker stationed at Baranovichi, the country’s remaining fighter airbase. Since arriving in December 2013, they routinely take part in Belarusian military exercises and help patrol the joint territory.

Despite their longstanding relationship, Russia’s move to support separatists in Ukraine has alarmed Minsk. As a result, Lukashenko’s loyalty is not what it once was. With Russia’s economic troubles also plaguing the country, Europe’s last authoritarian government may actually consider deep cutting Western-style reforms. Unsurprisingly, an IMF negotiating mission has been in the country the last two weeks of June. Belarus announced last year it would seek a $3 billion loan from the Fund. The Washington-based organization is hoping to push for greater structural changes which, inter alia, include increasing the role of private companies and reducing that of state owned enterprises. Recent communication from the IMF suggests progress continues to be made. The IMF last dispersed $3.5 billion worth of funds to the country in 2009.

Under this light, the dispatch of new S-300 systems to Belarus without an airbase agreement suggests Russia is attempting to bring the country back into the fold. It’s part of this push and pull, observers often seen in the relationship. The question remains, whether this time will be different given the changing structural relations in Moscow’s relationship with previous partners.