A Pope, a Patriarch and Great Expectations in Cuba 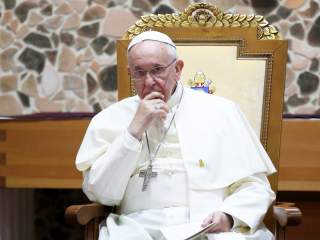 Call off the fanfare.

Next week’s meeting in Cuba between Pope Francis and Russian Orthodox Patriarch Kirill, announced Friday, has already been called a “historic step” toward “healing” the thousand-year “rift” between the Catholic and Orthodox communions. While it’s true that this will be the first meeting between any pope and the head of the Russian church, predictions that the encounter will help unite Christianity’s two oldest and largest bodies are premature.

Francis has an unusually close relationship with Ecumenical Patriarch Bartholomew of Constantinople, the symbolic head of the worldwide Orthodox church. (Bartholomew’s office is a kind of chairmanship among world Orthodoxy’s coequal patriarchs.) They have met and collaborated numerous times since Francis’s election on issues such as the environment, Middle East peace and Christian persecution. Each encounter between the two men has been framed by journalists’ fervent hope and anticipation of steps toward Orthodox-Catholic reunification.

But despite Francis’s friendship with Bartholomew, another figure has an even stronger influence within the Orthodox church: Moscow’s Patriarch Kirill. The Russian church is Orthodoxy’s biggest and most influential constituency—and arguably its most conservative. Since its return to prominence after the fall of the USSR, Moscow has been the most cautious Orthodox body when it comes to theological dialogue with other Christians, including the Vatican and the World Council of Churches. It has also expressed a gentle skepticism about efforts to unite ‘diaspora’ Orthodox communities, that is, to establish independent Orthodox churches in, for example, America and Western Europe. Indeed, Kirill will meet Francis amid a visit to Russian Orthodox communities in Cuba, Paraguay and Brazil, his first pastoral trip to Latin America.

And as bishops prepare for a potentially historic Pan-Orthodox Council of their own this summer, it was Moscow’s objections that relocated the event, years in the planning, from Istanbul to Crete. Moscow has also tabled discussion of Orthodoxy's contradictory ritual calendars, saying that there is no consensus on the subject. In other words, even within a communion known for resistance to change and innovation, Moscow consistently brings the most reluctance to the table.

There are other hurdles as well. In Ukraine’s ongoing conflict, adherence to the Ukrainian Greek Catholic Church or the Ukrainian Orthodox Church (subordinate to Moscow) has become a sharp dividing line. At a 2014 meeting of the Vatican’s Synod on the Family, Patriarch Kirill’s “foreign minister” faulted Ukrainian Catholics with exacerbating the hostilities and “entering into relations with Orthodox schismatic groups” who compete for legitimacy with Moscow, of which there are two. Francis, in turn, has repeatedly condemned violence perpetrated by both sides in Ukraine, and met with President Vladimir Putin in attempts to resolve the conflict.

These kinds of practical considerations are likelier than theological disputes to stymie future conversations between Moscow and Rome. The Russian Orthodox Church sees a world fraught with challenges to the spiritual integrity of its own flock, as well as potentially unwelcome developments within Orthodoxy itself. While many Catholics see division from Orthodoxy as a painful wound that can be healed with humility and compromise, Orthodox are likelier to recall a millennium of Vatican attempts to reabsorb their church—the bastion of right belief and worship—under its own terms. (The Fourth Crusade, the Council of Florence and the Union of Brest all appear on Orthodox Sunday school curriculums in the United States.)

This is not an environment in which fraternal reconciliation can flourish. During Moscow’s press conference announcing the meeting, the same archbishop who spoke at the Vatican in 2014 again brought up the repeated offenses of Ukrainian Catholics, suggesting that Cuba was the only neutral ground where the summit could have taken place. The meeting will focus on the “severe persecution” that Christians face in many places today, a cause so urgent that “it is necessary to put aside internal disagreements.”

Francis clearly has great affection for the Christian East that dates back to his Argentine seminary days, when he befriended a Ukrainian priest and served at the occasional Eastern Catholic Liturgy. In his pontificate so far, he has made many gestures of respect toward the Orthodox, including a joint Catholic-Anglican-Orthodox plan to set a common method of calculating a date for Easter, a discrepancy he has called scandalous. Moscow met this with raised eyebrows.

The Vatican and Moscow really do face a panoply of challenges and disagreements, which they can only solve in collaboration. Just don’t expect Orthodox-Catholic unity to be one of them.