President Abbas’ Speech to the UN: A Lost Opportunity 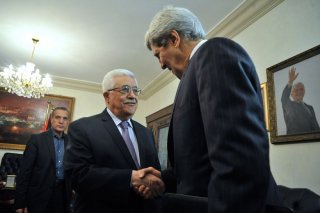 Reactions have been strong. The U.S. State Department said “President Abbas’ speech today included offensive characterizations that were deeply disappointing and which we reject. Such provocative statements are counterproductive and undermine efforts to create a positive atmosphere and restore trust between the parties.” The Palestinians replied by saying the American comments are “irresponsible, indecent and rejected.” What did Abbas say?

Israel has chosen to make it a year of a new war of genocide perpetrated against the Palestinian people….the occupying Power has chosen to defy the entire world by launching its war on Gaza….the third war waged by the racist occupying State in five years against Gaza….This last war against Gaza was a series of absolute war crimes….In the name of Palestine and its people, I affirm here today: we will not forget and we will not forgive, and we will not allow war criminals to escape punishment….Israel refuses to end its occupation of the State of Palestine since 1967, but rather seeks its continuation and entrenchment, and rejects the Palestinian state and refuses to find a just solution to the plight of the Palestine refugees….Israel has confirmed during the negotiations that it rejects making peace with its victims, the Palestinian people….It is impossible, and I repeat – it is impossible – to return to the cycle of negotiations that failed to deal with the substance of the matter and the fundamental question.

In that speech, Abbas said not one word of criticism of Hamas, nor did he acknowledge what is obvious: that Hamas started this war by its ceaseless bombardment of Israel with mortars and rockets. Presumably he decided that Palestinian domestic politics required him to avoid that truth and blame Israel for the conflict. Nevertheless, he always pays a price when making assertions that his listeners in the General Assembly hall know are not accurate. The accusation of genocide is particularly vile when thrown at Israel. The word has a meaning, and it is obviously absurd to claim that Israel’s actions in the Gaza war last summer were aimed at killing every Palestinian or a very large number of them or at eliminating the Palestinian people.

As to the negotiations, it’s worth recalling what U.S. negotiator Martin Indyk has recently said. Here is one account:

“We gave it everything we had, and we got nowhere,” Indyk said, laying the blame “50-50″ between Netanyahu and Abbas. Negotiations officially ended in April when Abbas opted to press for statehood through the United Nations rather than continue, a move that Israel had long said would be a deal-breaker. In recounting a nearly yearlong series of negotiations, Indyk said that both sides identified the agreement gaps early on and that Netanyahu eventually moved into “the zone of a possible agreement” on such thorny issues as the status of territories, Jerusalem, and mutual recognition of Israel’s and Palestine’s rights to exist. But during Abbas’s visit to Washington in March, he effectively “checked out” from the talks and stopped responding to proposals from the Obama administration on how to close a deal, Indyk said.

Abbas “shut down,” Indyk stated. Indyk spreads the blame to the Israelis and Palestinians both, but that of course was not what Abbas was doing.

Every head of government or head of state who addresses the General Assembly presents his own case, not that of critics or opponents, but when the speeches lose touch with facts and reality they do more harm than good. So it is with Abbas’s words, which have been firmly denounced and rejected not only by the U.S. Government and the Israeli government but perhaps more significantly by the Israeli left as well. This kind of language by Abbas weakens Israel’s “peace camp,” but Abbas does not seem to care. He is playing to a different set of audiences, including the many governments in the United Nations that would not recognize a serious, truthful speech if smacked in the face with it.

Perhaps his main audience is at home, but I wonder how much good it does him, and his Fatah Party, to give Hamas a pass. It is true that Hamas’s popularity rose during and after the war, but that was predictable and the question is where it’s heading now. Hamas promised that this war, and the destruction and death it caused, would be compensated by new and vastly better conditions after the war. But soon it will be getting colder and rainy in Gaza as winter arrives. Will there be a reconstruction bonanza? Will Israel and Egypt open the passages? Will construction begin on a seaport, much less on an airport? And when Gazans see that the answer is no, where will Hamas’s popularity then be?

Abbas’s frustrations must be great, especially after he heard President Obama say very little about the Israeli-Palestinian conflict other than to remark that it is simply not central. In his own address Obama said:

The situation in Iraq, Syria and Libya should cure anyone of the illusion that this conflict is the main source of problems in the region; for far too long, it has been used in part as a way to distract people from problems at home.

A speech that merely expresses anger and frustration is unlikely to help Abbas personally, his party, the Palestinian Authority, or Palestinians more generally. It was a lost opportunity–or perhaps more accurately, another lost opportunity. Perhaps the best description is the via the words his own spokesman used in attacking what the United States said: the Abbas speech was “irresponsible, indecent and rejected.”