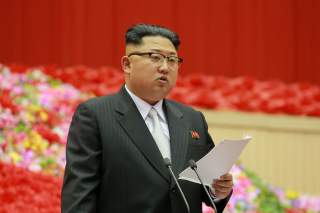 North Korea’s hydrogen bomb test is a game changer. The trendlines are clear: Unless some sort of major action is taken, in relatively short order, Kim Jong Un will have a weaponized hydrogen bomb—the most powerful of all nuclear weapons—and the missiles to deliver them to all points in the continental United States.

And once again, the world gets this terrible news from Kim’s now favorite delivery method—what amounts to a selfie with his new atomic menace and accompanying nuclear test. Far from being a maniac, he has shown himself to be a shrewdly calculating leader who has repeatedly backed up his boasts with successful atomic tests.

Now to be fair, we don’t have any real confirmation, besides a picture and a news clip from North Korean state media that Kim has an operational Hydrogen Bomb that is miniaturized or a missile that can carry it aloft to a target and an atomic test. But experts are already concluding that the scale of the test indicates that North Korea does indeed have a hydrogen bomb capability.

I for one am not shocked that Kim seems to have achieved a working design. Last month, I cited a Pentagon source declaring that Pyongyang was 6-18 months away from a Hydrogen Bomb. As of now, my source is still sticking to that assessment but added nothing Kim does or can do shocks him anymore.

Indeed, we must remember a few additional benchmarks Kim would need to hit in order to have an H-bomb for the battlefield. For Kim to have confidence in such an advanced nuclear weapons design, he would want to test it, potentially on several occasions, to ensure a working system, as well as multiple yields. So far, despite what Pyongyang has told us, Kim has never tested anything with the destructive power of a Hydrogen Bomb—except for maybe last night.

My assessment is that Kim does not yet have an operational H-Bomb, but is doing what he always does—proving to the world he has the resources, technology and capability to deploy a powerful nuclear deterrent. But he could have taken an important first step towards testing a viable design.

As a first step, it’s time to pull out all the stops to make sure we restrict the amount of financial resources going into North Korea and make it as hard as possible for Kim to build up his nuclear program and H-bomb designs. The goal of this new action—just like the last set of sanctions passed by the UN Security Council just weeks ago—should be to limit the amount money going into North Korea that helps fund its nuclear and missile programs.

President Trump needs to act fast—and unilaterally—by naming and sanctioning any entities that help launder money for North Korea or assist them in evading past or present sanctions, which could easily amount to billions of dollars. This will undoubtable impact China and its banks here in the U.S., but is a necessary step to ensure Beijing and Pyongyang know such actions will no longer be tolerated.

Second, we need to expand our military footprint in the Asia-Pacific region. President Trump should deliver on the promise of Barack Obama and actually “pivot” or “rebalance” to Asia—making it the number one national security priority. That means instead of sixty-percent of U.S. naval assets stationed in the Pacific we should increase that number to seventy-percent. These new assets should be a mix of attack and guided missile submarines as well as AEGIS destroyers that can defend against North Korean missile attacks.

Third, our land-based missile defenses in the region need to be ramped up as well as at home. We should work quickly with Japan to deploy additional PAC-3 batteries as well as deploy the THAAD missile defense system there as well.  Washington should work to quickly expand the number of Ground-based-Midcourse-Defense Interceptors we need to defend against a North Korean ICBM attack.

Lastly, President Trump should make clear that it is the policy of the United States that we will never—ever—accept a nuclear North Korea, and that all options still and will always remain on the table. While Washington will not start a war with Pyongyang, Kim must know we would respond to any North Korean military attack with the most severe of kinetic responses. And if Kim ever launched a nuclear attack, President Trump should also make clear that the portly pariah of Pyongyang would be signing his and his nations own death warrant.

Today we are paying the accumulated price of having not paid the required attention to a national security challenge that should have been front and center for past U.S. administrations. And while we might not have a perfect plan to mitigate the danger coming from North Korea, we do have many strong options that can collectively keep our nation and our allies secure.