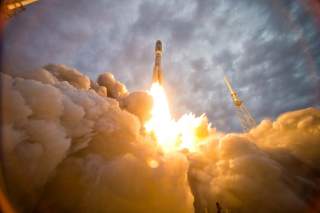 At this moment no one really knows what President Donald Trump's space policy will be. His State of the Union speech on February 28 made only one fleeting vague comment about space, stating that "American footprints on distant worlds are not too big a dream." And though in the past he has expressed enthusiastic support for space exploration, and his transition team has indicated a preference for private commercial space plus a desire to return to the Moon, no specific details about their policy have been released.

Determining future American space policy, however, is really not that difficult. All Trump has to do is to look at the numbers.

The dueling manned space policy objectives of Congress and President Obama since 2010 has forced NASA to follow a two-pronged approach to manned space, and a comparison of these two approaches provides stark empirical evidence for determining the most effective approach for putting Americans in space.

The first approach is centered on the Space Launch System (SLS) and the Orion capsule. This program, strongly supported by Congress, has followed the traditional approach used first during the 1960s. The President makes a Kennedy-like speech outlining some specific target in space that NASA must reach by some set deadline. For Kennedy, the target was the Moon and the deadline was the end of the decade. For George Bush in 2004 the target was the Moon and beyond and the deadline was 2015. For Barack Obama, the target was first an asteroid by 2020s, and then Mars by the 2030s.

NASA then takes over, designing the mission, the rockets, and the spaceships, all based upon those specific presidential targets and deadlines. Since 2006 NASA has been building Orion and the rockets that will launch it, initially the Ares rocket under Bush and now SLS under Obama, in order to tackle the ambitious space proposals of these two presidents.

The second approach, begun during the Bush administration and continued aggressively by Obama, is entirely different. In its need to provide cargo and crew to ISS, NASA stepped back from running the show and instead became a mere customer. SpaceX, Orbital ATK, and Sierra Nevada were hired to build and launch competing unmanned cargo freighters while SpaceX and Boeing were hired to build and launch competing manned capsules.

Under this commercial program, NASA designed nothing, and the rockets and spaceships it is buying are owned entirely by the private companies, built not only to serve NASA's needs but also as products the companies can sell to others for profit. (SpaceX's announcement on February 27 that they plan to send two paying tourists around the Moon by 2018 is a perfect example of this.)

A comparison of these two approaches, as shown in the table below, is quite striking and provides all the information that President Trump needs to set future American space policy. The comparison also proves that the old way of doing business, a big government-built centralized space program, is simply not a viable approach.

Essentially, commercial space is building more than ten times the number of capsules and rockets in about half the time for about 25% of the cost.

Why has private commercial space been so much more productive?

Obviously, the goals for Ares/SLS/Orion are far more ambitious, and therefore more difficult and expensive. Still, the Apollo capsule and the Saturn V rocket had similar goals, and it took NASA about half as long to build each. The 1960s space program cost more, but it had never been built before, and the cost included the entire program and all infrastructure. The cost of Ares/SLS/Orion only includes the first launch, and practically none of the necessary infrastructure.

Other factors must explain why Ares/SLS/Orion has been so ineffective.

First, NASA's contractual approach for these two programs is very different. The commercial contracts are simpler and fixed price, with payments only made when companies reached specific milestones. This encourages fast and efficient construction, because any delays or cost increases are the responsibility of the companies.

For Ares/SLS/Orion, NASA used its traditional and complicated cost-plus contract, where NASA picks up the tab should there be any delays or cost overruns. Thus, the companies involved have had no incentive to save money or time.

Second, because NASA did no design work for the commercial contracts, its overhead was relatively low, somewhere between 5% to 34% of the program's total cost. With Ares/SLS/Orion, however, overhead costs ranged from 56% to 72%. Essentially the government paid twice for Ares/SLS/Orion, once when NASA's labor force designed it, and then again when the agency hired contractors to do the work.

Finally, and most important, the private companies OWN their rockets and COMPETE to sell them. With Ares/SLS/Orion, ownership resides solely with NASA, which is focused on political goals unconnected to profit or cost savings.

With the commercial program, ownership forces efficiency and innovation. SpaceX for example built the Falcon 9 rocket to launch its cargo capsule, but they also built it to grab market share in the global satellite industry. To make sure their launch prices were low enough to attract customers, SpaceX had to design the rocket quickly, simply, and with cost in mind.

Similarly, competition fuels cost savings. Instead of relying one design, as NASA does with SLS/Orion, in its commercial space program the space agency uses several, and keeps the companies on their toes by having them compete against each other. The result has been lower costs, more choice for NASA, and a re-invigorated space industry.

So, what should President Trump do? Does he continue to fund Ares/SLS/Orion, which is taking almost TWO DECADES and more than forty billion dollars to design, build, and fly a SINGLE manned capsule, or does he instead shut it down and have NASA buy the products it needs to explore the solar system from multiple competing private companies?

I know what I would do. Based on these facts, I think any ordinary American would know what to do. By shifting our reliance from a single government-run centralized big space program to many different, independent, private, competing and PRODUCTIVE companies, the United States government will not only encourage the growth of a vibrant and prosperous aerospace industry, it will likely accomplish more than every other government space program in the world, and do so far faster than anyone can imagine.

Robert Zimmerman is a space historian, science journalist, and the author of GENESIS: THE STORY OF APOLLO 8. This op-ed is drawn from his just released policy paper, CAPITALISM IN SPACE: PRIVATE ENTERPRISE AND COMPETITION RESHAPES THE GLOBAL AEROSPACE LAUNCH INDUSTRY (The Center for a New American Security).