Punishing Russia: The Dangers of the 'Mariupol Test' 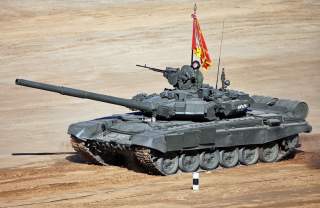 Frustrated by European reluctance to arm Ukraine, two prominent former U.S. officials—Hans Binnendijk, formerly senior director for defense policy at the U.S. National Security Council, and John Herbst, U.S. ambassador to Ukraine from 2003 to 2006—recently called in a New York Times piece for the imposition of what they have labeled “the Mariupol Test.” They argue that if and when the rebels move on the southeastern Ukrainian port city of Mariupol, the West must punish Moscow and its minions by giving Kiev the military wherewithal to expel Russian forces from its territory, doubling down on sanctions and, perhaps most seriously of all, “suspending Russia from the Brussels-based Swift financial-messaging system,” a measure that, they assert, “could cripple the already reeling Russian economy.”

Mariupol lies on the land approaches to the isthmus linking Crimea to the Ukrainian mainland. If the rebels did capture the city, Russia would win an unofficial land route to a piece of real estate that, a year after its annexation, it’s still having trouble supplying. According to Binnendijk and Herbst, however, Mariupol would be just the beginning of a longer campaign by the Kremlin to reassemble the tsarist-era Novorossiya “one slender slice at a time,” taking Russia’s informal border back to where it lay from the end of the eighteenth century to the 1917 revolution: all the way to Odessa and the Russian-sponsored enclave of Transnistria.

If we conclude that the Kremlin’s aim is indeed a massive, if informal, increase of Russian power across the upper western arc of the Black Sea that would return Russian influence to the doorstep of the Balkans—then it’s possible to indulge the former officials’ twitching fingers. But, since dropping Novorossiya into an interview last April, Russian president Vladimir Putin has studiously avoided the term. And he pointedly refused to recognize Novorossiya’s Crimea-style referenda and declaration of independence last year.

Instead, what the Russians have repeatedly said they want in Ukraine is regional autonomy for the Donbas, protection of the linguistic and cultural rights of Russian speakers across Ukraine, federalization of the country’s presently highly centralized political structure, and official acceptance of Ukraine’s formal neutrality, including a permanent commitment by NATO not to invite Kiev into the alliance. As Fiona Hill has recently argued, Putin doesn’t want to restore the Russian empire or the Soviet Union: what he wants is the revival of Russia’s prestige as a great power, including other powers’ respect for the primacy of its political interests in and longstanding historical and cultural ties with Ukraine and other former Soviet republics.

That doesn’t mean Mariupol isn’t a military objective for the separatists or the Kremlin. Nor can we be sure whether, having secured Mariupol, Russia won’t then turn its attention towards Odessa. But the Kremlin’s options are constrained by Russia’s parlous fiscal and financial situation. That, along with the mounting public discontent provoked by sharp inflation, ought to serve to keep Russia focused on the achievable in the Donbas and to discourage it from enlarging the zone of the conflict.

Any attempt on Mariupol, therefore, would probably have more to do with strengthening Moscow’s hand in pursuit of its more “limited” political aims than with spreading a neotsarist dominion across the Black Sea. (Certainly Turkey, Hungary and Slovakia all seem unfazed.) And that points to two things. The first is the relative weakness of Russia’s position; notwithstanding the Ukrainian army’s lackluster performance, Russia’s political aims in Ukraine far exceed its ability to coerce either Kiev or the West into accepting them. The second is each side’s mutually divergent views on what the Minsk Agreement means.

(Recommended: Why the West Should Be Ashamed about Ukraine)

In the West, many have interpreted the agreement as implying Russia’s capitulation. The Guardian recently quoted the new president of the European Council, Donald Tusk, former prime minister of Poland, as saying that:

The Minsk agreement makes sense only if fully implemented. Partial implementation would be very risky for Ukraine….First, we need full implementation including full control of Ukraine’s borders.

The problem is that Minsk ties control of the border to Kiev’s prior delivery of constitutional “special status” for Donetsk and Lugansk—something hardline Ukrainian nationalists in the Rada adamantly oppose. For Russia, Minsk is thus a step towards the creation of those conditions—genuine autonomy in the Donbas—which it considers preliminary to achieving the rest of its political goals in Ukraine.

The bad news, then, for those looking forward to a complete Russian backdown is that only old-fashioned diplomacy, however unpalatable, can bring an end to the war. The good news is that the conservatism of Russia’s political culture, that has seen it risk economic meltdown for the sake of defending what many in the West consider to be a nineteenth-century vision of its national interests, means that it is also open to the kinds of compromises that lay at the heart of old-style, Concert-of-Europe diplomacy. Not for nothing is the Kremlin celebrating the two-hundredth anniversary this year of the 1815 Congress of Vienna.

The human cost of an attack on Mariupol would be tragic. But Mariupol won’t change Russia’s fundamental aims; and getting sucked into a proxy war with Moscow over it won’t help the West negotiate a lasting political deal with the Kremlin that returns peace and stability to the whole of eastern Ukraine.

The only thing worse than trying to bludgeon Russia into defeat in eastern Ukraine and failing might be bludgeoning it into defeat and succeeding. If Putin did fall, nationalistic Russians would be unlikely to entrust their country to a liberal constructivist leader. U.S. Secretary of State John Kerry has said that he’s willing to try diplomacy with Assad. He should do the same, just as belatedly, with Putin.