Putin, MH17, and the Risk of Anomie 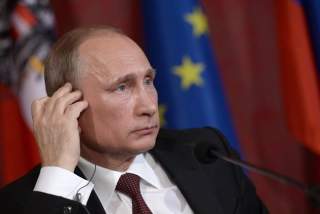 Vladimir Putin’s impenitent response to the killing of 298 innocent people last week crystallizes in dramatic fashion just how far his government is becoming isolated from the rest of the international community.  Disbelief and disgust in the West is being met by defiance and disdain from Moscow, with Putin seeking to shift the blame onto Kiev.  A worrying lack of intersubjectivity thus separates the two sides.  More alarming still, history shows that the implications of such estrangement, which may take years or even decades to play out, are potentially huge and extremely dangerous.

Almost all credible observers, including most western leaders and media, appear confident in two beliefs regarding the violent downing of MH17: (1) Russian military equipment was used to bring down the passenger plane; and (2) Russian-backed separatists pulled the trigger.  Although few officials are using John McCain’s language of culpability in reference to President Putin, the sentiments expressed by Barack Obama, John Kerry, David Cameron and others basically amount to the same thing—that is, unabashed criticism of Russian actions and direct challenges for Putin to take some responsibility for the attack on MH17 and do more to control his proxies inside Ukraine.

The problem is that Moscow’s response to the international opprobrium being heaped upon it has been characterized by a marked lack of contrition, resulting in a gaping mismatch between East and West over how to interpret and respond to what is, at base, a reckless act of aggression undertaken by armed insurgents against innocent civilians.  Taken in the immediate context of the civil strife in Ukraine, this failure of the world’s states to arrive at a modus vivendi is worrying enough, portending that the military stand-off on the ground in eastern Ukraine will become more entrenched instead of showing signs of abatement.  But even worse is the longer term prospect of Russia—a Great Power with awesome military capabilities and occupying a pivotal role in geopolitics—sliding into further international alienation.  A specter is haunting Eastern Europe—the specter of anomie.

Émile Durkheim defined anomie as the condition whereby the behavior of an individual becomes radically out of sync with prevailing societal norms.  Usually, any given society is able to regulate the actions of the individuals that exist within it.  Norms, values, beliefs, expectations and the anticipation of sanctions—all of these factors combine to shape and constrain the behaviors exerted by individual actors.  Logics of consequence and logics of appropriateness work in tandem.  Anomie occurs when this ability of society to order the behavior of its members breaks down.  Under a condition of anomie, individuals view society as an improper or illegitimate regulator of their actions.  Individuals become laws unto themselves—and dangerously so.

Of course, the international system (“international society”) does not exert the same level of influence over states or their leaders as domestic societies do over individual human beings.  Nevertheless, many scholars agree that a form of international society does exist—not least of all in the corpus of agreed upon public international laws that are supposed to regulate international conduct.  Even beyond codified laws, certain standards of behavior are expected of sovereign states—that emissaries be afforded diplomatic immunity or that civilians not be targets during war, for example.  States that fall short of these shared expectations suffer the consequences of being named, shamed, and potentially sanctioned and ostracized.

To be sure, many states have rebelled against the strictures of international society over the course of world history.  Indeed, norms are flouted, laws broken, rules refashioned or rejected outright with some degree of frequency.  Nevertheless, derogation from international expectations rarely is regarded as a good thing.  Nor does it tend to go unpunished.  There is even an assortment of unflattering epithets for states that defy international society wholesale or on a regular basis: “revisionists,” “spoilers,” “rogue states,” “pariah regimes” and the like.

States become targets of such vilification and are exiled from international society via a process that is partly of their own making yet partly foisted upon them.  On one hand, most statesmen crave international acceptance and the legitimacy that membership of the international community confers upon them as leaders.  Few wish to be ostracized by other leaders.  On the other hand, national leaders cannot be seen to passively respond to discipline meted out by their sovereign peers for fear of looking obsequious and dishonored in the eyes of audiences both at home and abroad.  As such, the urge to push away ones foreign detractors in a show of defiance is thus just as likely to obtain as is the impulse to make amends.  States spiral into anomie when international opprobrium and a national response of defiance work in tandem, reinforcing one other and working against a pariah state’s rehabilitation into international society.

What happens when states—willingly or not—become ostracized from international society, cut loose from its orbit and freed from its capacity to regulate their behavior?  Interwar Japan represents an interesting parallel with the contemporary Russian case.  By most accounts, Japan was a fairly responsible stakeholder of the pre-World War I international system, a trusted ally of Great Britain from 1902 and a markedly restrained rising power during the late nineteenth century.  Japan’s territorial gains in Korea, for example, while obviously anathema to Koreans, were carefully negotiated with the era’s primary Great Powers such as Britain and the United States, and Japan even agreed to check its territorial ambitions when faced with stern international opposition—for example over its occupation of the Liaodong Peninsula (Port Arthur) in 1895.  Overall, Japan’s leaders were preoccupied with a powerful desire to avoid rocking the boat in international diplomacy up until 1914.

Yet Japan began to chafe against the prevailing norms of international society in the 1920s and 1930s.  More and more, Japan’s leaders became frustrated with the perceived double standards of western states.  In 1919, Japan’s motion for racial equality was voted down at Versailles, for example.  Japan was also denied absolute control over Germany’s erstwhile colonies in the Asia-Pacific despite British wartime pledges to the contrary.  Most bothersome of all, Japan was repeatedly chastised for its meddling in China despite centuries of widespread and naked European colonialism in Asia, Africa and the Americas.  Throughout the period, Japan and the Eurocentric international order looked ripe for confrontation.

The catalyst for estrangement came in 1931, when soldiers in the Kwantung Army faked an attack on a Japanese-controlled railway in Manchuria—the so-called “Mukden Incident.”  The event was used by Japan’s leaders as a pretext for the invasion of Manchuria and the establishment of a puppet state across the region, Manchukuo.  Abroad, however, the Mukden Incident was quickly exposed as a ruse and in 1932 the League of Nations issued a report condemning Japan and denying recognition to Manchukuo.

The League’s actions were mirrored by criticism from leading states and statesmen.  The United States, in particular, issued the Stimson Doctrine to formally declare any conquest by Japan in China to be illegitimate.  Exposed and isolated, Japan departed the League of Nations in 1933 and drifted into diplomatic isolation, becoming ever more hostile towards the outside world even as it became insulated from and immune to criticism from abroad.  A radical diplomatic realignment was set in motion with Japan increasingly rejecting the international system it had once tried so hard to belong to, a process that would culminate in Japan’s invasion of China in 1937 and its fateful bombing of Pearl Harbor in 1941.

The Japanese case shows that it is not just small states like North Korea or Iraq under Saddam Hussein (rogue states par excellence) that can reside outside of the bounds of international society.  Great Powers, too, can find themselves exiled from the broader international community.  When that happens, their destructive behavior can intensify as they find themselves free of social constraints that might otherwise have been exerted upon them.

Japan’s interwar experience also highlights the importance of catalytic events—in Japan’s case, the Mukden Incident and its controversial annexation of Manchuria.  Other examples abound.  The vilification of Benito Mussolini following his invasion of Abyssinia (Ethiopia) in 1935, for example, was instrumental in pushing Italy outside of the orbit of London and Paris and into the arms of Berlin.  For Adolf Hitler and Nazi Germany, it was the abrogation of the Munich Agreement and the invasion of Czechoslovakia in March 1939 that finally marked Germany’s irrevocable departure from European society.

Today, there is a huge risk that Russia is headed in the same direction as interwar Japan, Italy and Germany.  Although not totally isolated on the international stage, Putin’s actions in Crimea and eastern Ukraine visibly trouble his counterparts in the west, drawing both the ire and the exasperation of foreign leaders.  With Putin sticking to a defiant and bellicose tone even withstanding such a blatantly hostile action as the downing of MH17, the future of east-west relations looks ominous.  Anomie is at the door.  And the worst could still be to come.