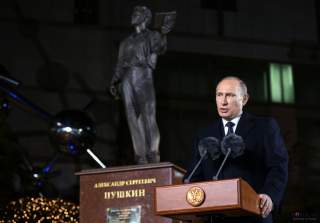 With the ceasefire in Ukraine showing early signs of holding, international attention will now intensify towards finding a diplomatic solution to the crisis facing the country. For Kiev and its Western backers, prospects are bleak for bringing about their desired settlement. But it will also not be easy for Vladimir Putin to convert his considerable short-term bargaining power into lasting strategic gains.

On the face of it, Russia’s position in Ukraine is strong. Even though the Russian economy has taken a battering as a result of Western-imposed sanctions, Moscow still enjoys a commanding position on the ground. Only with Russia’s blessing can the conflict be brought to a permanent halt, which would seem to grant Moscow a sizable degree of leverage for extracting concessions from its Western adversaries.

There has been much speculation about what Russia’s long-term strategic goals might relate to: its fear of NATO expansion, its desire to recreate a sphere of influence in the former Soviet space and its deep-seated craving for prestige on the world stage. But the overlooked point is that if Vladimir Putin wants to convert his position in Ukraine into a lasting victory along any of these dimensions, then he needs to play his diplomatic cards very carefully indeed. And even if he does so, the odds are heavily stacked against him.

Putin’s ability to win meaningful concessions from the West—a renunciation of the Western interest in Ukraine’s future or broader recognition of a Russian sphere of influence in Eastern Europe, for example—will depend upon his ability to engineer a fissure among the powers ranged against him. Putin will not succeed in ambitious reforms to the European security architecture if the other great powers stand firm. Instead, his gains will be limited to influence over eastern Ukraine at most. But if Putin is able to broaden the appeal of Russian foreign policy, he will emerge from the crisis with a permanently stronger hand in global affairs. Simply put: Putin needs allies.

History suggests that the most effective revisionist powers are those able to split potential opposition to their policies. Nazi Germany was able to remilitarize and expand its influence across Mitteleuropa partly because Britain, France, the United States and the Soviet Union were either slow to see Hitler’s regime as a menace or else were convinced that others would deal with the threat. Imperial Japan’s rise to power during the late nineteenth and early twentieth centuries was facilitated by a military alliance with Britain, which served to deter others who stood to lose from Japan’s rise from doing anything to stop it. And during the Cold War, the Soviet Union was at its most threatening to the United States when Moscow looked close to splitting the Western alliance—through lobbying West Germany to make a separate peace with the Warsaw Pact, for example, or by encouraging leftist governments to “go neutral” (or “Finlandize”).

The challenge for revisionist states, then, is to ensure that their actions do not provoke unified opposition. Judged against this yardstick, Russian diplomacy is looking less than stellar. From rekindling relations with North Korea to buzzing coastal Britain with nuclear bombers, Putin appears to place more stock in flexing Russia’s muscles than in showing diplomatic restraint. Such bullish grandstanding might play well in some domestic circles, but it does no favors to foreign leaders like Angela Merkel, who might otherwise be disposed to serve as a bridge between Moscow and other Western capitals and could feasibly mediate a grand bargain that would cement some lasting strategic gains for Russia.

If Russia continues to represent itself as a military threat to its neighbors, it will find itself isolated and unable to reshape international politics in the truly fundamental ways that its leadership would like to. This is good news for those who would like to see Russian influence stop at Russia’s borders. But complacency must not be allowed to take hold. The danger for Western capitals is Putin finding a way to break the diplomatic cordon sanitaire—if the United States loses enthusiasm for protecting the peace of Europe; if dovish European states pursue appeasement over deterrence; or if the great powers of tomorrow, China and India especially, turn out to be silent partners (or worse) in Putin’s challenge to the liberal order.

Indeed, weak in their condemnations over the annexation of Crimea and continuing to make noises in favor of concessions to Putin, there seems to be at least some appetite in Beijing and New Delhi for seeing Russia succeed in chipping away at Western stewardship of world affairs. As the localized conflict in eastern Ukraine begins to stabilize, then, the global effort to keep Russia contained and isolated must be redoubled.