Raptor Resurrected: What Will it Take to Restart F-22 Fighter Production? 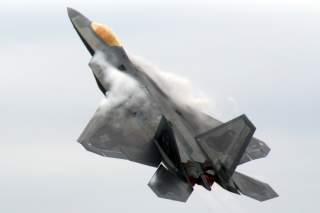 The House Armed Services Committee is directing the U.S. Air Force to look at the possibility of restarting production of the stealthy, supersonically cruising Lockheed Martin F-22 Raptor air superiority fighter in its fiscal year 2017 budget. The HASC move comes as a resurgent Russia reasserts itself in Europe and China becomes increasingly aggressive in the Asia-Pacific.

“The committee directs the Secretary of the Air Force to conduct a comprehensive assessment and study of the costs associated with resuming production of F-22 aircraft and provide a report to the congressional defense committees, not later than January 1, 2017, on the findings of this assessment,” reads the bill text. “In light of growing threats to U.S. air superiority as a result of adversaries closing the technology gap and increasing demand from allies and partners for high- performance, multi-role aircraft to meet evolving and worsening global security threats, the committee believes that such proposals are worthy of further exploration.”

The committee is also directing that the Air Force assess its future air superiority requirements based on its anticipated near-term and mid-term threat projections—from both the air and the ground. The Congress also wants an assessment of how the F-22’s mission is evolving to fight inside anti-access/area-denial environments (A2/AD); when the current fleet will reach the end of their service lives; when the Boeing F-15C will retire; and when a next-generation F-X replacement might become operational.

Additionally, the Congress wants an estimate of how much it will cost—and how long it would take—to restart the Raptor production line. The legislative branch also wants cost estimates for the purchase of 194 additional airframes to meet the Air Force’s post-Cold War requirement for 381 Raptors. The service currently has 186 operational Raptors remaining in its inventory—of which only 123 are “combat coded” according to Air Combat Command.

The Congress also wants cost estimates for additional jets beyond just having the total number of airframe to fill out ten fully equipped combat-coded squadrons. It wants to know “the estimated cost of procuring sufficient F-22 aircraft to meet other requirements or inventory levels that the Secretary may deem necessary to support the National Security Strategy and address emerging threats.”

The Congress appears to be serious about an F-22 production restart. In the bill language, it asks the Air Force to study other factors that might add to the cost of restarting the Raptor line. Those include “the availability and suitability of existing F-22A production tooling; the estimated impact on unit and total costs of altering the total buy size and procuring larger and smaller quantities of aircraft; and opportunities for foreign export and partner nation involvement if section 8118 of the Defense Appropriations Act, 1998 (Public Law 105-56) prohibiting export of the F-22 were repealed.”

Indeed, the production tooling could be a serious problem. While Lockheed and the Air Force supposedly made every effort to carefully squirrel away the tooling and instructions for building the F-22, problems have emerged when maintenance crews have attempted to pull the equipment in order to repair damaged jets. One recently retired Air Force official with direct knowledge about the service’s efforts to repair two damaged Raptors said that they faced severe difficulties with retrieving the correct tooling.

In one example, Air Force maintainers needed to build a particular component from scratch to replace a severely damaged part for an F-22. The crews went into the Conex boxes where the tooling and instructions to build the part were allegedly stored, but to their considerable surprise and aggravation, the container was empty. The same pattern repeated itself several times—and as of the last time the source checked–the issue has not been completely resolved. The bottom line is that even if the Air Force wanted to, it may not be physically possible to restart the line—at least not without a huge additional investment in time and money.

The second factor to consider is that the Raptor’s avionics were dated even before the jet was declared operational in December 2005. While the Raptor is the most advanced operational warplane in the Air Force’s inventory, its computer architecture dates back to the early 1990s. The core processors run at 25MHz–since it took so long to get the jet from the design phase to production. Moreover, the Raptor’s software is particularly obtuse and difficult to upgrade–which is partly why integrating the AIM-9X and AIM-120D missiles onto the aircraft has been so problematic.

The jet’s avionics would have to be completely revamped for a production restart, not just because they’re obsolete, but also because the jet’s antique processors and other components haven’t been made in decades. That would be a very expensive proposition. However—if the Congress appropriated enough money—the Air Force could piggyback an F-22 upgrade onto the planned effort to implement an open architecture avionics overhaul on the Lockheed Martin F-35 Joint Strike Fighter in the 2020s. That would allow the Pentagon to take advantage of economies of scale and have commonality between the two types.

Restarting the Raptor production line has come up every so often since then-secretary of defense Robert Gates ordered production of the F-22 shuttered in 2009. Only 187 production model—or 195 total—aircraft were built. That is far short of the original Air Force requirement for 750 jets and about half of the 381 number that Air Combat Command set as a revised requirement in the early 2000s.

But while the Raptor remains the single best-performing fighter ever built, the basic F-22 airframe design originates from the 1980s. Indeed, the Raptor has been in service for more than a decade. The technology is old—stealth, propulsion, avionics and airframe design have come a long way since the F-22 was designed. If the Air Force were to invest several tens of billions of dollars into an aircraft, it has to ensure that those technologies are still relevant to threats decades from now. By 2035, the Raptor will have been in service for 30 years—without a complete overhaul, most of its systems would be hopelessly obsolete by then.

The reality is that the Air Force likely will probably never restart the Raptor production line. The technology is dated and the jet may not be relevant to the threat environment past the 2030s–especially if one considers that PAK-FA and J-20 are both around the corner. The Air Force has already started laying the groundwork for a next generation air superiority capability it is calling the F-X. We don’t yet know how it will shape up, but it will surely be designed to fight the threats of tomorrow.