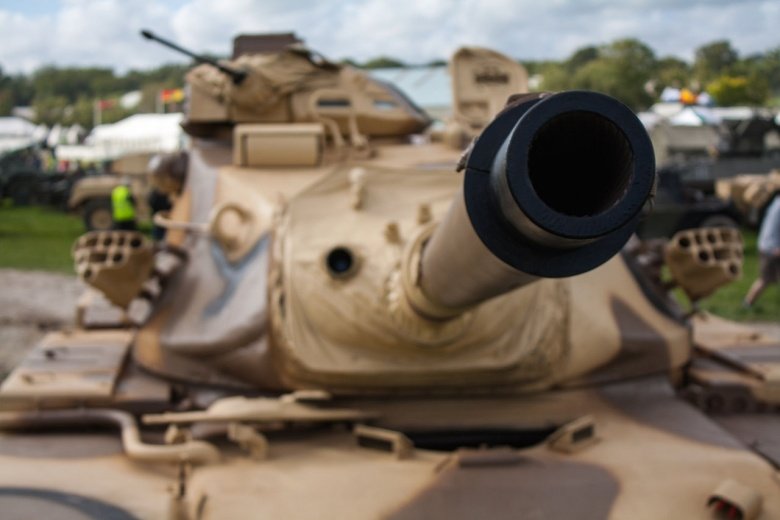 Raytheon is pitching a new upgrade for the venerable M60A3 Patton main battle tank that would turn the elderly design into a competitive force on the modern battlefield—all at a fraction of the cost of a new vehicle.

Named the Raytheon M60A3 Service Life Extension Program (SLEP), the upgrade is being offered for export to nations that need the performance to take on threats like a Russian-built T-90S, but can’t afford a top-of-the-line machine like the M1A2 SEP(v)3 Abrams or Leopard 2A7.

At the core of the upgrade is a new 950-horsepower diesel engine—which replaces the original 750-horsepower unit. As part of the deal, the engine would be reconditioned to a zero hour condition. Meanwhile, the old turret hydraulic controls would be replaced with new electrical systems, which are faster, more responsive and quieter than their predecessors.

Offensive firepower is exponentially improved by swapping out the old 105mm M68 rifled gun in favor of the Abrams’ German-made L44 120mm smoothbore cannon. The addition of the new weapon would give the M60A3 the ability to engage enemy tanks as advanced as the T-90MS on a near equal footing. In fact, with the upgrade, the M60 probably outperforms older M1A1 variants.

That’s because in addition to the new cannon, the M60 would receive completely new digital fire-control and targeting systems—including day and thermal sights. The system is comparable to the U.S. Army’s M1A1D standard. Indeed, the fire-control software was developed for the U.S. Army. While Raytheon does not specifically mention networking—it’s reasonable to assume the modernized tank would be compatible with the U.S. Army’s networks.

Raytheon says that the U.S. Army tested the M60A3 SLEP at the Aberdeen proving grounds, but the company does not provide any details about any survivability improvements that are being incorporated into the tank. However, a Raytheon video does imply some improvements to the armor package.

Indeed, there are a few visible improvements—such as the addition of side skirts. The configuration shown in the video does not seem to feature reactive armor—but it is fitted with slat armor. Nonetheless, reactive armor could likely be added as needed. In the future, it is possible that more even more advanced features like an active protection system—which are starting to proliferate around the world—could be incorporated into the M60A3.

In addition to much improved performance, Raytheon claims that one major side benefit of the SLEP is that training and maintenance cost would be lower than for new tank because crews are already familiar with the basic M60. That means that Raytheon is targeting the existing base of M60 users around the world—which is still a substantial market.

However, while the modernized M60A3 is cheap, it remains to be seen if it would be truly effective against modern enemy tanks like the T-90A—and especially the extremely formidable T-14 Armata. It is likely that the M60A3 SLEP would fair well against most T-72 variants that are found around the world. The real test for Raytheon and the “M60” will be to convince potential buyers to forego a new machine in favor of a reconditioned one.