Raytheon Could Cash in on America's Next Super Weapons: Lasers And Hypersonic Missiles 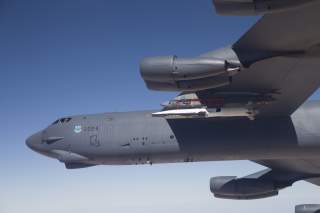 Raytheon foresees that high-energy lasers might become a profitable line of business in the future. Indeed, the company recently won a contract from the U.S. Special Operations Command (SOCOM) and the U.S. Army to demonstrate firing a prototype laser from a Boeing AH-64 Apache gunship against ground targets.

“During the quarter, we also made progress on certain early-stage development technology that lays the foundation for potential future franchises,” Raytheon chairman and chief executive officer Tom Kennedy told investors on July 27.

“For example, Raytheon and the U.S. Army, in collaboration with the U.S. Special Operations Command, completed a successful flight test of a high-energy laser system aboard an Apache helicopter. The demonstration marks the first time that a fully integrated laser system successfully engaged and fired on a target from a rotary wing aircraft.”

The Apache demonstration is just the tip of the iceberg. Kennedy—who holds a doctorate in engineering from the University of California—said he believes that lasers could be an entirely new business area for the company.

“The second area, which I believe is a new emerging area, is the area of high-energy lasers,” Kennedy said.

“I mentioned that a little bit in our script and in the work we've done on a laser pod and put it on a helicopter.”

Using a helicopter to perform the SOCOM demonstration served a useful purpose because it is an extremely challenging environment that pushes the technology to its absolute limits.

“Why a helicopter?” Kennedy said.

Another line of potential future growth for Raytheon is hypersonic weapons technology. The United States, Russia and China are locked in a three-way race to develop and field these high-speed weapons that could potentially be able to strike targets with near impunity—if the technology matures to point where it is practical.

“We recently won a major program from DARPA called the Hawk program and so working on that very hard. In addition to that, also working in the undersea area. So bottom line is pushing those areas significantly.”

Thus, if the Trump Administration delivers on its promise of increased defense spending—particularly on greater research and development on directed energy weapons—the future looks bright for the company.