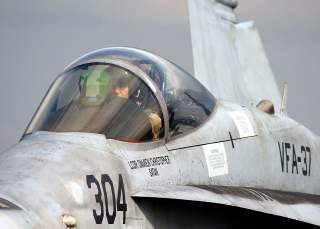 Raytheon is being awarded a $9.6 million Navy contract to provide engineering technical services and field services for the AN/APG-65/65(V)/73/79 Active Electronically Scanned Array (AESA) Radar, associated systems, and support equipment in support of the F/A-18, EA-18G, and AV-8B aircraft.

Many Navy aircraft use AESA radars because of their superior ability to thwart jamming attempts and reduce the possibility of detection by the signal’s receiver.

Of the four radars listed, the AN/APG-79 is the only system still in production, and the Navy has spent the last few months updating its capabilities. Last week, the service bought three more radars from Raytheon, and earlier this month Compass Systems won a $9.7 million contract to develop new AN/APG-79 radar algorithms to improve target identification and classification.

A Raytheon factsheet lists several AN/APG-79 capabilities that optimize battlefield success. The radar’s beam operates at nearly the speed of light to boost situational awareness. These radars broadcast their channel across a wide variety of frequencies,  which provides the system with enhanced cover and stealth.

While Raytheon stopped producing the other radars years ago, the systems still provide valuable battlefield resources. For instance, The AN/APG-73 mixes motion-sensing with a waveform generator module that allows the system to make high-resolution radar ground maps and perform precision strike missions.

Work will be performed in California and Virginia and be completed in November 2021. The Navy obligated $201,522 at time of award, all of which will expire at the end of the current fiscal year. The contract was not competitively procured pursuant to 10 U.S. Code 2304(c)(1). The Naval Air Warfare Center Weapons Division in California is the contracting agency.