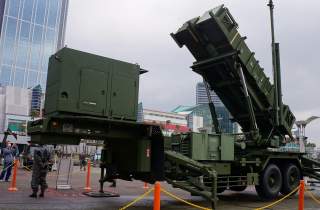 Raytheon is bragging that its new 360-degree gallium nitride-based (GaN) Active Electronically Scanned Array (AESA) radar for the Patriot air and missile defense system has passed 1000 hours of operation in little over a year. That means that the Raytheon test program is moving roughly twice as fast as a typical radar test effort according to the company.

"We achieved this milestone so quickly because of our successful experience developing and maturing GaN for programs like the U.S. Navy's Air and Missile Defense Radar," Doug Burgess, director of AESA programs at Raytheon's Integrated Defense Systems business, said in a statement. "We're ready to take the next step and get this radar into the hands of our customers."

The addition of the new radar will afford the Patriot a capability that it has never had before—360-degree scanning. Older versions of the Patriot have only 180-degrees of coverage unlike newer systems like the Lockheed Martin’s Medium Extended Air Defense System (MEADS) or (any) Russian air defense systems that were built from the outset with full 360-degree coverage.

Raytheon's GaN-based AESA prototype radar uses two antennas to achieve 360-degree coverage. According to the company its prototype “routinely demonstrated 360-degree capability by working together with a second GaN-based AESA antenna that was pointed in a different direction.  As targets flew out of one array's field of view and into another, the two arrays seamlessly passed information back and forth, tracking the target continuously.  The main array also detected and tracked tactically maneuvering fighter jets and thousands of other aircraft.”

The use of GaN versus older Gallium Arsenide (GaAs) semiconducting materials also allows for a much higher performance radar design. Typically, because of GaN’s much higher power density and thermal efficiency, the same amount of material can offer five to ten times the performance of a GaAs-based equivalent. Thus, a radar can either be smaller and much more energy efficient or, the same size, but many times more powerful.

According to Raytheon, its GaN-based Patriot AESA radar will work with the Integrated Air and Missile Defense Battle Command System and other open architecture designs. The new radar also maintains compatibility with the existing Patriot Engagement Control Station and it will be full interoperable with existing NATO systems.

Raytheon does not appear to have found a buyer for this new version of the Patriot just yet. But Poland and Germany are potential foreign customers. It is also possible that as the threat of great power conflict increases, the U.S. Army will also adopt the new system.