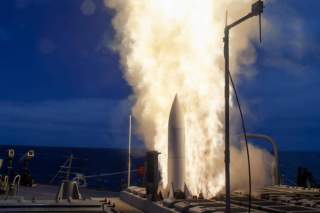 During the Sept. 22 test—which took place on ranges that are part of the Point Mugu naval station in South California—USS Princeton (CG-59), a Ticonderoga-class Aegis missile cruiser, used its Cooperative Engagement Capability datalink to tie into the NIFC-CA network. Using data from an airborne sensor—most likely a Northrop Grumman E-2D Advanced Hawkeye—Princeton, which is equipped with the Navy’s latest Lockheed Martin-built Aegis baseline 9 combat system, engaged and destroyed an over-the-horizon target.

"The multi-mission SM-6 is in a class of its own as it demonstrates its ability to go further, faster and counter more threats to offer maximum mission flexibility," said Mike Campisi, Raytheon’s Standard Missile-6 senior program director. "The missile's ability to defend against so many different threats makes it the go-to solution to meet modern fleet defense needs across the globe."

The company did not provide any details about what kind of airborne sensor, what kind of target or exactly what kind of range the test was at. However, the radar horizon for an S-band radar such as Aegis SPY-1B—which is the system mounted on Princeton—is roughly 250 miles for a target flying at 35,000ft. That range shrinks as the target altitude drops to as little as 40 miles—if the target is low enough. Linking the ship to an aircraft such as the E-2D allows combat vessels to engage targets below the radar horizon—such as sea-skimming supersonic anti-ship missiles like the Mach 2.8-capable Russian-built NPO Mashinostroyeniya P-800 Oniks.

Basically, under the NIFC-CA construct, an E-2D or another sensor platform might detect an incoming target. The aircraft then relays the contact to the cruiser, which then launches an SM-6. The SM-6 uses a combination of semi-active radar-homing, inertial guidance with mid-course updates and active-radar terminal homing to hit the target. As the radar closes into terminal range—it switches from external data sources to its own radar. The SM-6 is effective against everything from cruise missiles, to aircraft, to ballistic missiles to enemy surface ships. Its range could be as great as 250 nautical miles.

Weapons like as the SM-6 are part of the reason why the U.S. Navy is confident in its ability to operate in areas that are defended by highly capable anti-access/area-denial weapons such as the Baltics or the Western Pacific. Indeed, there are multiple variants of the Standard missile currently in production. While SM-6 is primarily intended for air defense, the SM-3 variant is designed specifically to defend against incoming ballistic missiles.

A variant of the SM-3—called the Block IIA—is expected to be tested in October with a slight update of the Aegis Baseline 9 standard. That weapon will be used in Japan to deter North Korean adventurism and will also be used on Aegis Ashore batteries —part of the Phased Adaptive Approach—in Eastern Europe to defend NATO against a ballistic missile attack.