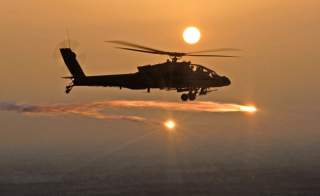 For instance, looking at real-time Electro-Optical/Infra-red images from drone cameras in the Apache cockpit gives crews an increased ability to, for instance, more effectively destroy groups of enemy fighters on the move in pick-up trucks or attack insurgents hiding near a known U.S. Army convoy route planning to launch an ambush.

“Now before the unit even deploys out of the Forward Arming Refueling Point, or FARP, they can actually bring up the UAS (drone) feed, look through the sensors and see the target they are going to attack up to 50 or 60 miles away,” Apache Program Manager Col. Jeff Hager told Scout Warrior in an interview.

Hager also explained that maintaining drone sensors on targets which can move and change gives the Apache crew an opportunity to make adjustments while en-route to a target location.

“They have full situational awareness on that target as they fly inbound and do not lose any data on that target on the way,” Hager added. “They don’t go into a situation where they are surprised.”

Apache pilots in Afghanistan are now flying upgraded AH-64E-model helicopters which give the platform increased speed and performance.  In development for many years and now part of the operational force, the AH-64E models use a stronger 701D helicopter engine, composite rotor blades and next-generation communications technology and avionics.

“The additional power and capability that the aircraft brings actually changes the face of the battlefield. Now they can close, maintain and assume contact activities with the enemy at a much faster rate. The enemy could time the amount of time it was going to take the Delta (“D” model Apache) models to get to them. We completely threw that out the window and they (the “E” model Apache crews) can get there much faster,” Hager explained.

The ‘E” model is able to transport a larger amount of ammunitions and fuel in what is described as “high-hot” conditions at altitudes of 6,000 feet and temperatures of 95-degrees or above.  The innovations built into the “E” model give the helicopter all of the technological advantages of its predecessor “D” model – yet at a lighter weight making it more maneuverable and effective.

The AH-64E Apache is also 20 knots faster than the previous model and can reach speeds of 164 knots.

The current “D” model Longbow Apache is heavier than the original “A” model helicopter; it carries the Longbow radar and significantly improved targeting and sensing technologies, however it lacks the transmission-to-power ratio and hard-landing ability of the initial “A” model. The AH-64E is engineered such that an advanced, high-tech aircraft the weight of the previous “D” model can have the power, performance and landing abilities of an original “A” model with a much lighter weight.

“We are getting super feedback from what they were doing over in combat. MUM-T has really changed the state of the battlefield,” Hager added.

The AH-64E is highly mobile, lethal and can destroy armor, personnel and material targets in an obscured battlefield conditions at ranges out to 8-kilometers, an Army statement said.

The AH-64E, which is manufactured by Boeing, was also praised by Boeing officials who report hearing favorable feedback from Army pilots who flew the helicopter in combat.

“Its performance in 'high-hot' conditions made it able to go from point to point to the target where it was going, as opposed to having to go longer and down into a valley or up into a higher peak” said Kim Smith, Vice President of Attack Helicopters, Boeing.

Smith also said that Apache crews say the composite rotor blades make for a smoother flight.Kris Osborn became the Managing Editor of Scout Warrior in August of 2015. His role with Scout.com includes managing content on the Scout Warrior site and generating independently sourced original material. Scout Warrior is aimed at providing engaging, substantial military-specific content covering a range of key areas such as weapons, emerging or next-generation technologies and issues of relevance to the military. Just prior to coming to Scout Warrior, Osborn served as an Associate Editor at the Military.com. This story originally appeared in Scout Warrior.