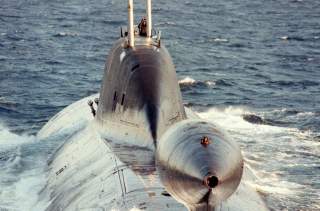 Back in the 1980s, when Tom Clancy’s fictional North Atlantic boiled with Cold War naval action, the West really was worried about the Greenland-Iceland-UK, or GIUK, Gap.

A glance at a map shows why. The GIUK Gap is one of the most crucial maritime choke points on the globe. It’s the gateway for ships in European waters to enter the Atlantic. During World War II, German U-boats passed through the gap on their way to attack Atlantic and North American shipping lanes. During the Cold War, Soviet subs would have had to transit the chokepoint to do the same. In both conflicts, the West invested great effort to sealing off the gap with antisubmarine patrol ships and aircraft, and even underwater microphones like SOSUS.

The GIUK Gap is busier than ever with commercial shipping, as well as oil and gas rigs and fishing vessels. But since the fall of the Soviet Union, the gap has faded into a strategic anachronism while attention has shifted to the Pacific.

But with Russia more assertive, and Moscow modernizing its submarine fleet, the gap is again becoming a battleground, warn some Western analysts.

Indeed, NATO is considering whether to revive its Cold War–era Atlantic Command. But should hostilities erupt between NATO and Russia, it won’t be a replay of World War II or the Cold War, predicts Magnus Nordenman in an article for the Royal United Service Institute, a British defense think tank. That’s because neither Russia nor NATO have more than a shadow of their Cold War capabilities for penetrating or defending the gap.

“While the Russian navy is indeed making a comeback with increasing skills and sophisticated capabilities, including quieter submarines and the ability to fire land attack cruise missiles, it is nowhere close to its Soviet days in terms of numbers,” writes Nordenman, director of the Transatlantic Security Initiative at the Atlantic Council’s Brent Scowcroft Center. “On the other hand, NATO’s maritime posture and capabilities have changed dramatically, and resource constraints and other security priorities – both in Europe and globally – mean that the Alliance will be unable to bring to bear the same quantity of capabilities as it did during the Cold War.”

For the West, this doesn’t make the West’s situation any less dangerous. While there are fewer Russian subs now, they are quieter and more capable. “NATO and the US will not be able to rely on the tactics, procedures and technologies (such as passive sensor arrays) developed and refined during the Cold War,” Nordenman writes.

Russia’s Northern Fleet is especially formidable. Compared to the Baltic and Black Sea fleets, the “Northern Fleet has far more capability, and, given the geography of the High North and the small presence of other forces there, has a much easier task in gaining access to the global maritime commons,” Nordenman writes. “In short, the High North offers Russia the maritime path of least resistance to access the global maritime domain through the Atlantic.”

In addition, the GIUK Gap is vulnerable to long-range, land-based Russian antiship and antiaircraft missiles on the Kola Peninsula can reach past Norway and into the North Atlantic, according to Nordenman.

As for NATO, many alliance members slashed their fleets of maritime patrol aircraft after the 2008 financial crisis, and as the alliance focused on areas such as the Balkans and Afghanistan. The remaining patrol planes have been diverted to other tasks such as ocean surveillance for terrorist or refugee vessels. In the event of war, antisubmarine aircraft would be further hampered by the United States’ closure of its air base in Keflavik, Iceland in 2016, and Britain’s shutdown of its Kinloss airfield in Scotland.

The situation now sounds reminiscent of 1942–43, when Allied patrol aircraft lacked the range to patrol the GIUK area: the infamous “Mid-Atlantic Gap” became a happy hunting ground for U-boats.

Nordenman recommends tighter cooperation among NATO members, such as pooling maritime patrol aircraft. The Icelandic air bases should be reopened, while antisubmarine drones could patrol the gap.