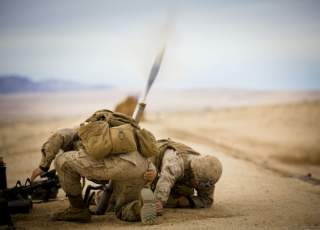 Hugh White's considered response to the questions I posed in our recent exchange in the Lowy Interpreter on the fundamentals of Australian defense strategy prods me to elaborate on my previous arguments as well as to make some counterpoints.

On the question of irregular warfare, we seem to be in agreement that it is certainly the most common form of warfare today but we part company on whether it is more important to focus on regular warfare which, while rare, is in Hugh's judgement more serious for a country like Australia.

Without wishing to engage in a long and arcane definitional debate about regular and irregular warfare, let me make a couple of clarifying comments. Modern warfare does not lend itself to such easy compartmentalization, for even high-end warfare now features many elements once associated with supposedly lower level irregular warfare: the employment of militias and so-called volunteers or separatists to support main force units (Ukraine and Iraq); attempts to disguise or plausibly deny the use of professional armed forces (Ukraine, Georgia); the rapid morphing of terrorist groups into well-armed insurgencies with transnational reach, including the capacity to occupy and govern territory (Syria, Iraq, Afghanistan).

The Australian Defense Force (ADF) must have the capacity to fight these kinds of conflicts in support of Australia's preferred regional and global order as well as to conduct maritime operations in the approaches to the Australian continent. Both capabilities are important. But one should not be artificially prioritized over the other especially at a time when traditional notions of what constitutes regular and irregular warfare are blurring and mutating, as new forms of hybrid warfare emerge.

On the utility of force-structure determinants, Hugh may have misunderstood my argument. I am not averse to setting strategic objectives for the ADF. In fact, I think this is essential. My main criticism of the two chosen determinants of the ADF's force structure is the lack of contestability or transparency around the process by which they were singled out and the way in which they have been reified into dogma.

How did we arrive at these determinants? And why these two and not others? I could certainly think of many other factors which ought to be taken into consideration, including the capacity to deploy, sustain and protect a force far from Australia. I'm sure Hugh will agree (the authors of the First Principles Review of Defense certainly do) that contestability of key assumptions and judgements must become an embedded feature of Defense’s planning processes and culture.

I understand that in the real world, the ADF may sometimes be used "for a purpose for which one would not buy it." However, a versatile, flexible, purpose-built force will always be better than one designed for only one or two contingencies, especially when the design considerations are exceedingly narrow and determined by fiat, rather than arrived at through a transparent, strategic risk-assessment process.

Finally, let me come back to Hugh's contention that a maritime strategy is the appropriate military strategy for the ADF. I would dispute his view that most of our strategic objectives can be achieved "most cost effectively by maritime operations." Should we regard our operations in Afghanistan and Iraq, or most of our operational deployments over the past twenty years, as evidence that the ADF operates according to the tenets of a maritime strategy? I think not, no matter how flexible one's definition of "maritime".

This has nothing to do with my view, or Hugh's for that matter, about the efficacy or wisdom of particular deployments. It is simply to recognize that in practice, the ADF does not adhere to a maritime strategy by any reasonable understanding of the term for the reasons I have set out in the recent Lowy Analysis (Full-Spectrum Defense: Re-thinking the Fundamentals of Australian Defense Strategy) and in a 2003 article in the Australian Journal of International Affairs.

What do I mean when I say that the ADF needs to have a full-spectrum military strategy which extends to the crucially important fourth (cyber) and fifth (space) domains of warfare? I mean that cyber and space are domains in themselves in exactly the same way as land, sea and air. They are not merely conduits or enablers of conventional military operations in the maritime space. And they are domains that the future ADF will have to shape and if possible control, independent of maritime or land operations, since control of these domains may be decisive in future conflicts against other states, as well as against non-state actors.

Professor Alan Dupont is Non-Resident Senior Fellow at the Lowy Institute and foundation Michael Hintze Chair of International Security at the University of Sydney. He holds a PhD in International Relations from the Australian National University and is a graduate of the Royal Military College, Duntroon, and the US Foreign Service Institute. This piece first appeared in the Lowy Interpreter here.