Report: America Will Use F-35s in Pacific in a 'Show of Force' as Signal to North Korea 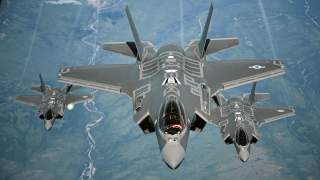 The Air Force is planning an F-35A show of force in the Pacific in coming weeks now that 12 F-35A’s have deployed to Japan for a six-month rotation, service officials said.

While service officials describe the move as a routine deployment, called a Theater Security Package, the current tensions with North Korea are by no means lost on the Air Force and other Pentagon planners – who are preparing to demonstrate F-35 power, technology and combat readiness in a series of upcoming exercises.

Pacific Air Forces is now finalizing plans for a wide range of F-35A multi-national collaborative  training events which will, without question, seek to demonstrate possible coordinated attack options using the stealth aircraft, if ordered, over the Korean peninsula.

The 12 F-35s, now based at Kadena Air Base, Japan, arrived from Utah’s 34th Fighter Squadron, Hill Air Force Base, officials with Pacific Air Forces said in a statement.

While Marine Corps F-35B aircraft have been deployed to Japan for months, this new deployment is the first US Pacific Command operational tasking for the Air Forces’ F-35A; it is designed to build upon the F-35s debut in the Indo-Asia-Pacific at the Seoul International Aerospace & Defense Exhibition earlier in November, service officials said.

"The F-35A is operational and combat ready, and this F-35 theater security package to the Pacific Command area of responsibility is further proof of the Air Force's capability to deploy the world's most lethal fighter anywhere on the planet,” Air Force spokesman Capt. Mark Graff told Scout Warrior.

Interoperability will be a key focus of upcoming exercises, Graff said – a comment of particular relevance in light of the fact that both Japan and South Korea are F-35 Foreign Military Sales customers; Japan already has an F-35 and deliveries to South Korea are slated for 2018.

Next-generation sensors, data-links and long-range targeting technology – engineered to work in tandem across a fleet of aircraft -  are precisely the kinds of interoperability demonstrations likely to be explored. In fact, given the F-35’s Distributed Aperture System sensor (DAS), an array of six cameras covering 360-degrees around the aircraft, and the F-35s long-range Electro-Optical Targeting Systems – the aircraft is uniquely suited for ISR and data-sharing missions alongside more traditional fighter jet operations.

Although North Korea’s Air Force is reported to be both largely antiquated and technologically obsolete, they do have fighters which could in some instances require air-to-air combat from a US F-35 or F-22.

An assessment of North Korean fighter aircraft appeared in The National Interest as follows:

North Koreas is also known to have advanced air defense weapons, a scenario quite likely to necessitate the use of stealth aircraft. Also, an F-35’s full-complement of air-to-air weapons, long range sensors and dogfighting maneuverability could also position the aircraft for air combat should that be necessary.

The Air Force, quite expectedly, did not make specific comments about the North Korean threat and its possible relationship to upcoming exercises. However, Pentagon leaders have consistently said current policy requires that North Korea irreversibly de-nuclearize. As part of this strategic equation, it is certainly not an exaggeration to say the F-35’s presence in Asia near the Korean Peninsula could be intended to send an unmistakable message to North Korea.

Furthermore, while much has been made of North Korea’s mobile missile launchers and arsenal of conventional ballistic missiles able to threaten South Korea and Japan, it is also true the that F-35 was specifically engineered to recognize and destroy far-away land based weapons launchers. Therefore, in addition to land-based defenses such as Patriot and THAAD or ship-based SM-6s, stealth air power in the form of F-35s could prove instrumental in any kind of US attack on North Korea.  In particular, the F-35A is able to fire laser-guided precision weapons such as the GBU-54 which is engineered to track and destroy mobile targets such as mobile missile launchers on the move.

Such strategic questions now lodge themselves within the sphere of potential contingencies, as the Pentagon has said very little about what a military operation against North Korea would look like; senior DoD officials have, however, been very clear that there is indeed a military option.  Given this, it is tough to imagine any kind of military attack not drawing upon the F-35 for air-ground attacks or sensor, datalink and ISR-kinds of missions in an environment where stealth technology is likely necessary.  These possibilities underscore the importance of an anticipated US and allied show of F-35 combat force in the region through multi-national exercises.

The Air Force has more than 120 F-35As in its inventory, Graff added.

The Air Force has spent much time over the last few years to train and prepare F-35 pilots for these kinds of anticipated deployments.

In one instance several years ago, Air Force F-35A Joint Strike Fighters coordinated close air support with Navy SEALs, trained with F-15Es and A-10s, dropped laser-guided bombs and practiced key mission sets and tactics in Idaho as part of initial preparations for deployment. This “mini-deployment” was designed to set the stage for various operational scenarios.

During this exercise, F-35s dropped 30-bombs comprised of 20 laser-guided bombs and 10 JDAMS.

During these exercises at Mountain Home AFB, the F-35A also practiced coordinating communications such as target identification, radio and other command and control functions with 4th-generation aircraft such as the F-15.

These training exercises in Idaho, were also the first “real” occasion to test the airplane’s ability to use its computer system called the Autonomic Logistic Information System, or ALIS. The Air Force brought servers up to Mountain Home AFB to practice maintaining data from the computer system.

“Fusion” technology allows F-35A pilots to process information and therefore make decisions faster than a potential enemy. He explained how this bears upon the historic and often referred to OODA Loop – a term to connote the Observation Orientation, Decision, Action cycle that fighter pilots need to go through in a dogfight or combat engagement in order to successfully destroy the enemy. The OODA-Loop concept was developed by former Air Force strategist Col. John Boyd; it has been a benchmark of fighter pilot training, preparation and tactical mission execution.

The F-35 is also engineered with an Active Electronically Scanned Array Radar which is able to track a host of electromagnetic signals, including returns from Synthetic Aperture Radar, or SAR. SAR paints a picture of the contours of the ground or surrounding terrain and, along with Ground Moving Target Indicator, or GMTI, locates something on-the-move on the ground and airborne objects or threats.