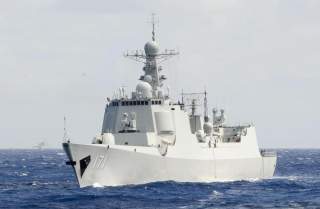 Ongoing U.S.-China tensions in the South China Sea regarding Chinese artificial island-building are leading many at the Pentagon to sharpen their focus upon the rapid pace of Chinese Naval modernization and expansion.

China has plans to grow its navy to 351 ships by 2020 as the Chinese continue to develop their military’s ability to strike global targets, according to a recent Congressional report.

The 2014 U.S.-China Economic and Security Review Commission recommended to Congress that the U.S. Navy respond by building more ships and increase its presence in the Pacific region – a strategy the U.S. military has already started.

Furthermore, the Chinese may already be beginning construction on several of their own indigenous aircraft carriers. China currently has one carrier, the Ukranian-built Liaoning. It is not expected to have an operational carrier air wing until sometime this year, according to the report.

Some members of Congress, including the House Armed Services Committee's Seapower and Projection Forces Subcommittee Chairman Rep. Randy Forbes, R-Va., are advocating for both a larger U.S. Navy and a stronger U.S. posture toward China's behavior in the region.