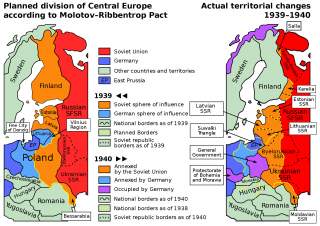 Even seventy-eight years after World War II began, there are controversies that still rage. Could the Nazis have won the war? Did the United States need to drop two atomic bombs on Japan?

But one thing that should be indisputable is that in August 1939, Nazi Germany and the Soviet Union signed a nonaggression pact.

Yet a growing number of Russians apparently believe that the Nazi-Soviet Pact is fake news. Nearly 17 percent of Russians in a recent poll believe the pact never happened, according to the Levada Center, a Russian polling firm. That's almost double the 9 percent who disbelieved the existence of the pact in 2005.

Levada queried 1,600 Russians in August 2017 regarding the Nazi-Soviet Pact, also known as the Ribbentrop-Molotov Pact. Almost half either said they had never heard of it, or didn't know enough about it to comment. For the remainder, 40 percent said they believed it actually happened, down slightly from 43 percent in 2005.

Equally interesting was that in the 2017 poll, 45 percent of respondents either fully or somewhat approved of Joseph Stalin signing the agreement. This despite the Nazi-Soviet Pact enabling Adolf Hitler's conquest of Poland and Western Europe in 1939–40. By securing his eastern border, Hitler could concentrate his forces in the west, thus avoiding the two-front war that would eventually doom Nazi Germany after the German invasion of Russia in 1941.

To be fair, history is always contextual. Stalin deserves no mercy historical or otherwise, but his making friends with Hitler was not necessarily irrational. In the days before World War II, Britain and France made feeble and unenthusiastic attempts to build an anti-Nazi alliance with a Soviet regime they despised as much (or more) than the Nazis. However, collective security between the three never came to pass. Convinced—with good reason—that the Western powers were plotting to induce Germany and Russia to destroy each other, Stalin reversed the game by making peace with Hitler in the hopes that the Nazis and the capitalists would be the ones to destroy themselves, leaving the Soviet Union to pick up the pieces. Germany conquered Western Europe in two months and at little cost, leaving a stunned Soviet Union to face almost the full power of the Nazi war machine.

The Levada Center has been classified as a "foreign agent" by the Russian Ministry of Justice. One reason may be that while Americans are often accused of being ignorant about history, the Levada poll suggests that Russians aren't much better. Levada also asked what event happened on September 17, 1939. Only 11 percent correctly answered that the Soviets invaded and seized eastern Poland as part of their agreement with the Nazis.

However, 29 percent believed that September 17 was the date that World War II began (Germany invaded Poland on September 1, and Britain and France declared war on September 3). Another 7 percent responded that the Great Patriotic War began on that day (and not June 22, 1941, when Germany invaded the Soviet Union). And in a poll result sure to please Russia's neighbors, 8 percent agreed that this was the date that "the USSR reached out to help the people of Western Ukraine/Belarus."

And 45 percent had no idea. Ignorance of history knows no borders.